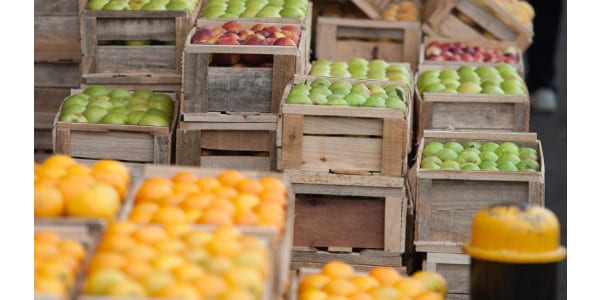 COLLEGE PARK, Md. — While incentive-based programs have had many success stories in helping to regulate air quality, control pollution, and protect wildlife and fisheries, they may not be the answer to controlling invasive pests. In a new paper published in a top tier field journal, the Journal of Environmental Economics and Management, Erik Lichtenberg and Lars Olson, professors in Agricultural & Resource Economics at the University of Maryland (UMD), examined whether incentive-based tariff policies could be successful in preventing the introduction of invasive pests arriving in imported fruits and vegetables. Exotic organisms that have the potential to become invasive pests are found in about 3% of fresh fruits and vegetables, and under the Plant Protection Act, all cargo containing plant materials, from produce to cut flowers, requires inspection by the Animal and Plant Health Inspection Services of the United States Department of Agriculture (USDA-APHIS). While in other industries, incentive-based policies have helped make regulation more efficient and less costly overall, researchers find that to have measurable impacts on invasive pest reductions, these policies would not only damage diplomacy and trade relationships, but cost consumers roughly $38 million for each potential invasive pest introduction avoided.

“The goal of an incentive-based policy is to make somebody pay a price for things that they do that impose costs on society [such as pollution], or to subsidize a cost for creating benefits for society that would otherwise be expensive to bring to market [such as vaccination programs],” explains Lichtenberg. “Right now, every shipment into the United States that contains plant materials of some kind has to be inspected. If inspectors find something that might be an invasive pest, they have to act quickly, notify a scientist who can make an assessment, and turn it around within 24 hours because these are perishable commodities. But the idea here was that taxes could incentivize exporters to ensure that their cargoes were cleaner, which would reduce the burden of inspection or even the need for inspections completely.”

To examine this concept, Lichtenberg and Olson developed a statistical model to simulate scenarios and determine the feasibility, possible effects, and overall cost to the consumer of an increased tariff on fruit and vegetable imports. They examined 10 years worth of data in their analysis including information on tariff rates and characteristics of fruit and vegetable shipments such as the type of commodity, country of origin, average commodity value, port of entry, growing season, and transportation pathway.

Researchers did in fact find that higher tariffs were related to a decreased likelihood of finding an invasive pest in a shipment, but this correlation was very small. “We are talking about increasing tariffs 4 to 13 times what they are now to get a measurable impact, and even then the impact is small,” says Lichtenberg. “The changes aren’t sensitive enough to really be a good tactic.”

“But it gets worse,” Lichtenberg adds, “because the majority of fruits and vegetables that come into this country come in without paying any tariff at all because of free trade agreements.”

In the scenarios considered by the researchers, they found that revoking duty free status, or free trade agreements on fruits and vegetables, was the only way to get a measurable impact in pest reduction through tariffs. “Duty free products have a higher probability of having an invasive pest found than those entering with a higher tariff. The difference is small, but it is there,” says Lichtenberg. “In the case of commodities that are duty free, the effects of adding a duty are pretty large. You end up with about a 25% reduction in invasive pests from rescinding duty free status.”

Lichtenberg adds, “But then you ask, what does it cost us?”

The United States has free trade agreements with a host of countries, including Mexico, countries in Central America, the Caribbean, South America, Israel, and the Palestinian Territories. These free trade agreements not only keep the costs of fruits and vegetables down for the local consumer, but also are strategic diplomatic initiatives that better trade relations with our neighboring countries, incentivize the reduction of narcotic crops produced in South America, promote economic growth in Central America and the Caribbean, and help foster peace initiatives in the Middle East.

“If we are going to go down this road, we have to be prepared to throw away all these other diplomatic initiatives that we have,” says Lichtenberg. “It makes our life and the world much messier and definitely isn’t advisable.”

Furthermore, there is a substantial cost to the consumer of “going down this road.” Researchers looked at a group of 28 commodities accounting for a large share of the total quantity of shipments and calculated the consumer loss of rescinding duty free status compared to the reduction in potential invasive species, and found that the costs were about $38 million per introduction avoided.

Overall, the cost of invasive species can be very high, with species like the Mediterranean fruit fly introduced in the 1980s costing California substantial resources to control and ensure that their entire citrus industry wasn’t crippled, still with occasional sightings that cause additional eradication efforts. “Every so often one of these things gets out of hand and causes significant damage or requires a substantial investment in mitigation to prevent things from getting out of hand,” says Lichtenberg. “New diseases and pests can be very costly to the industry and ultimately the consumer. But it’s so rare, so when you look at probability and cost together, the expected damage is low.”

Lichtenberg and Olson conclude, “There are a lot of places where incentive-based policies like an extra tax is a great idea, but this isn’t one of them.”

Lichtenberg and Olson will continue to examine issues surrounding invasive pests to determine the best strategies for control and management. “My motto is that if it’s nasty and it has something to do with agriculture then I’ve probably studied it,” says Lichtenberg.

The paper, entitled “Tariffs and the risk of invasive pest introductions in commodity imports: Theory and empirical evidence,” is published in the Journal of Environmental Economics and Management, DOI: 10.1016/j.jeem.2020.102321.

— University of Maryland via EurekAlert!