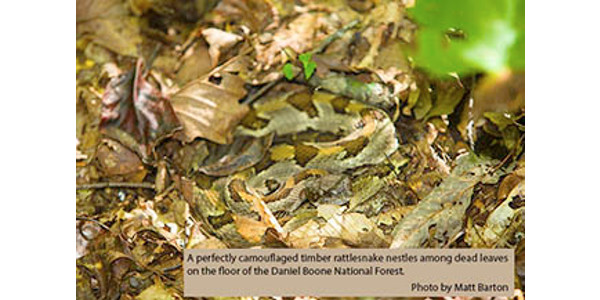 LEXINGTON, Ky. — Love ’em or hate ’em, people are fascinated by snakes. The University of Kentucky’s updated snake ID website has enough information to satisfy just about any question a person could have concerning the slitherer cutting across their patio or field.

The new website, updated by Steven Price, assistant professor of stream and riparian ecology in the UK Department of Forestry, and Andrea Drayer, UK forestry research analyst, highlights life histories, color patterns, physical characteristics and ecological roles of the animal Price terms as “perhaps the most maligned” in Kentucky. It provides the user with the information needed to identify snakes they might encounter in their yards, on their farms, or out and about in wetlands and rivers, woodlands and prairies.

Users can search for species by geographic region as well as body characteristics such as head or body shape, color or pattern. The site brims with photographs of the different snake species found in Kentucky, as well as information about their habitat and natural history.

“I’m hoping this will be widely used by general citizens interested in snakes, as well as students, teachers and extension agents,” Price said.

Though some people are concerned about running across dangerous snakes, Price said there are only four species of venomous snakes in the state, with only the copperhead widespread.

“The copperhead occurs almost throughout the entire state, except they’re fairly rare throughout the inner Bluegrass. They appear to be most commonly encountered in the forested areas near the Kentucky River palisades,” he said. “The other three—the cottonmouth, pigmy rattlesnake and timber rattlesnake—are uncommon throughout most of Kentucky.”

One of the species most people will encounter in their backyards is the eastern gartersnake, which, though harmless, will often release a pungent musk if handled—one of the many snake facts contained on the site.

“We’re hoping that people will use this website to learn about snakes and perhaps become more positively enthusiastic about them,” Price said.

The Department of Forestry is part of the UK College of Agriculture, Food and Environment.

Collaborative venture in the works