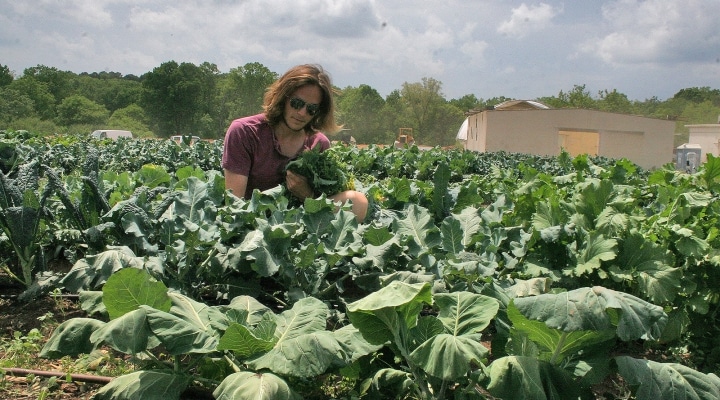 At UGArden, the University of Georgia’s student community farm, plots of lettuce, kale, beets, carrots and greens planted during the winter wait to be harvested. Despite the absence of dozens of student workers due to the campus closure prompted by the COVID-19 crisis, a handful of staff at the garden are keeping fresh produce flowing out into the community to benefit food-insecure families. (photo by UGA CAES/Extension, creative commons/flickr.com)

ATHENS, Ga. — At UGArden, the University of Georgia’s student community farm, plots of lettuce, kale, beets, carrots and greens planted during the winter wait to be harvested. Despite the absence of dozens of student workers due to the campus closure prompted by the COVID-19 crisis, a handful of staff at the garden are keeping fresh produce flowing out into the community to benefit food-insecure families.

UGArden is being run by the garden’s four regular staff members, led by UGArden farm manager JoHannah Biang and director David Berle, along with a few AmeriCorps VISTA workers who have been reassigned to work in the garden.

“When spring break was over and it was mandated that the students were not going to return, the garden supervisor and I made a plan for how to operate the garden because we see ourselves as essential,” said Biang.

UGArden is a major source of fresh produce for the Campus Kitchen at UGA, which provides meals to food-insecure older residents in Athens, many of them grandparents who are raising their grandchildren. Because Campus Kitchen lost access to its regular facility for storing produce and prepared meals due to the pandemic, UGArden also stores those items at the garden’s facilities.

“We have shifted our operations to match up with the recommendations from above on how to handle our operation in light of the COVID-19 crisis,” Biang added.

Garden staff work in the garden on staggered shifts to limit the number of people working on-site, implement social distancing practices in the fields when harvesting, and follow sanitizing guidelines.

“We’re on rotating schedules, so we don’t all work on the farm at the same time. Some of our staff work from home on the days when others are coming in to the farm, and our AmeriCorps VISTA workers are checking on the school gardens,” Biang said.

As a result of the crisis, UGArden is also holding its spring medicinal herb plant sale online.

Customers can choose between dozens of herb plant varieties, order and pay for plants online. The garden staff will contact customers to schedule contactless pickup times. The sale, which continues through May 8 at 5 p.m., can be found at ugardenherbs.com/products.

In addition to Berle and Biang, UGArden staff working during the crisis include Assistant Farm Manager Sarah Rucker, UGArden Herb Manager Noelle Fuller, UGArden student worker Erica Head, UGArden AmeriCorps VISTA worker Lynae Bresser, and Wick Prichard, Grow It Know It program coordinator and supervisor to school VISTA workers with the UGA Office of Service-Learning and the Department of Horticulture in the College of Agricultural and Environmental Sciences. In addition, AmeriCorp VISTA workers Ellen Clegg, Emma Myer, Charles Evans and Morgan Watson are working on the farm during the crisis.

“We are all doing a lot of farm work, and AmeriCorps has allowed their volunteers to perform direct service at this time, when their primary purpose is usually capacity building,” Biang said.

Previously Clegg, Myer, Evans and Watson were working in Clarke County middle schools in the Grow It Know It program, which is designed to grow solutions that address food insecurity, food waste and climate change through project-based learning activities.

The produce harvested from UGArden helps feed 53 Athens-areas families through Campus Kitchen. Produce is also being donated to Manny Stone, a culinary arts teacher at the Athens Community Career Academy, who uses it to prepare meals for those who are in need due to job losses during the crisis.

“Just being out here and being able to contribute to the community has been a really positive thing for the people out here,” Biang said. “Being able to use our efforts and the state-funded farm to fill a gap in the community, even more than we normally do, is really important.”

In addition to harvesting the crops that are ready now, UGArden staff are planting summer crops, including squash, peppers, okra and tomatoes.

“We will be rolling through the summer like we always do. We will plant as much as possible so we can continue giving,” Biang said. “It has been stressful because we can’t do everything like we used to. We have to think and adapt to operate according to new guidelines from the Centers for Disease Control and Prevention, but the staff has been phenomenal. It has been really great to see our staff and the VISTA workers really pitch in and want to stay and be a part of something a little bit bigger in the service aspect. It is encouraging.”

To support UGArden’s efforts, visit ugarden.uga.edu and click on “Donate” to UGArden.  For information on ongoing efforts at the Campus Kitchen at UGA, see the story at news.uga.edu/campus-kitchen-keeps-food-on-table.