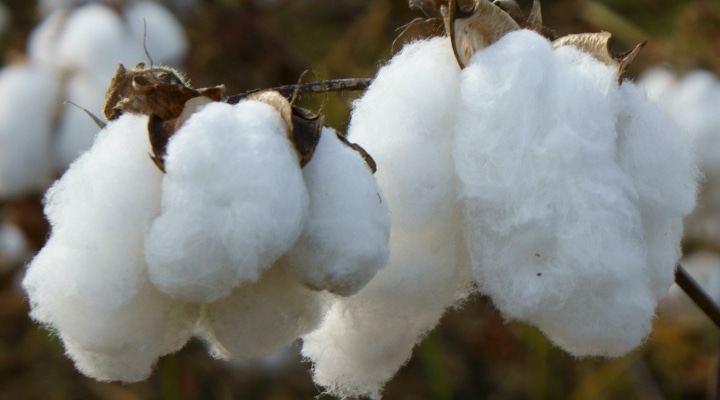 While aphids aren’t a direct threat to cotton plants, they can carry a persistent virus that is difficult to control and can cause significant losses in one of Georgia’s most important crops. (photo by captrosha, creative commons/flickr.com)

MACON, Ga. — While aphids aren’t a direct threat to cotton plants, they can carry a persistent virus that is difficult to control and can cause significant losses in one of Georgia’s most important crops.

First identified in Alabama in 2017, cotton leaf roll dwarf virus (CLRDV) — which causes leaf reddening, crinkling and curling, as well as deformation of cotton bolls — started spreading quickly. By 2019, it had been detected in every state of the cotton-producing region east of Texas, including Georgia. CLRDV is related to the virus that causes cotton blue disease (CBD), which has been endemic in cotton crops in Argentina and Brazil, causing yield losses up to 80%.

To better understand the genetic diversity of the CLRDV population, the team mapped the near-complete genomes of six virus samples from Georgia and one from Alabama to compare with samples from other areas in the U.S., South America and China.

While CLRDV has not caused as much yield loss in Georgia as CBD has in other cotton-growing regions, avoiding the virus to prevent potential yield loss is an important focus of research for Sudeep Bag, assistant professor of crop virology in the College of Agricultural and Environmental Sciences (CAES) at the University of Georgia’s Tifton campus. In March, Bag published a paper describing the virus in the journal Crops and Soils with UGA Cooperative Extension entomologist Phillip Roberts and UGA plant pathology professor Bob Kemerait.

Because the virus has spread rapidly throughout the Cotton Belt and has been detected in both symptomatic and asymptomatic cotton plants — and because there are not yet reliable chemical controls for either the aphids that carry the disease or the virus itself — Bag said avoidance and removal of alternate hosts are currently the best recommendations based on the team’s research.

“Until we had knowledge of the virus, aphids had not been a problem to cotton growers. It’s not the pest — it’s the virus that is the problem,” said Bag, adding that research into chemical control for the virus is not developed enough to help producers currently dealing with the disease.

Since 2018, the researchers have tracked the virus extensively in Georgia cotton fields and have discovered that the virus is able to survive in harvested cotton stalks in the field over the winter. It is a common practice to leave cotton stalks in the field after harvest, then till them into the soil before the next season’s planting. But it appears to be time to rethink that practice.

“Many growers leave the cotton stalks in the field after all of the bolls are harvested. The general thinking is that winter will come the freezing weather will kill the plant and the virus, but based on what we have learned in the past year, winter temperatures are often not cold enough to kill all of the virus in south Georgia,” Bag said.

Field testing over the past year has shown that winter temperatures were not enough to kill all of the plants, allowing the virus to remain viable. Once those stalks are tilled under and new cotton is planted, the virus is then able to infect the new plants.

“Growers should remove those stalks as soon as possible after harvest. We understand this adds an extra expenditure for growers in an already expensive farming operation, but it is about trying to avoid a virus and minimizing its inoculum in nature, which could cause heavy losses in the next crop,” said Bag, adding that his team found that the virus had survived in 75% of the cotton stalks left in one field tested for the study.

Additionally, researchers have identified at least 23 common weeds that can carry the virus between crop plantings.

“Through alternate host studies, we found that there are 23 species of weeds where the virus survived outside of the cotton plants. These weeds are not all winter weeds, some fall across the seasonal and calendar year. Apart from the cotton plants, the virus is surviving on those plant species growing close to the cotton fields,” Bag said. “Growers need to avoid or control those weed species in their cotton fields.”

For more information on plant virology research being performed at UGA-Tifton, visit the lab’s website at http://site.caes.uga.edu/plantvirologylab.

Time to head to Moultrie for Sunbelt AG Expo
October 17, 2021