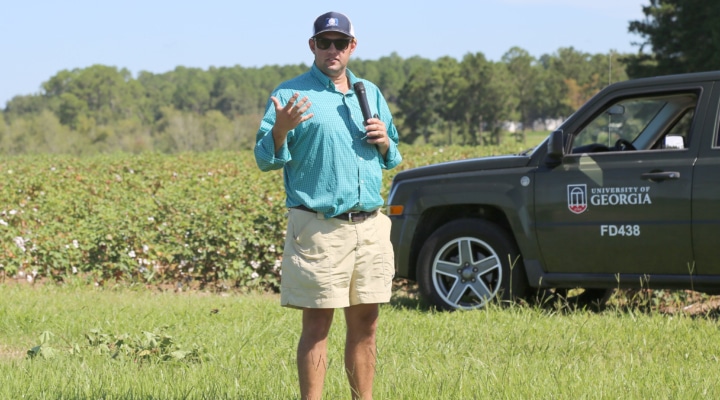 Georgia’s cotton crop was decimated by Hurricane Michael in 2018. Now, University of Georgia Cooperative Extension cotton agronomist Jared Whitaker is hoping his research will help alleviate some of the risks associated with harvesting cotton when tropical systems arrive in the fall. (photo by UGA CAES/Extension, creative commons/flickr.com)

TIFTON, Ga. — Georgia’s cotton crop was decimated by Hurricane Michael in 2018. Now, University of Georgia Cooperative Extension cotton agronomist Jared Whitaker is hoping his research will help alleviate some of the risks associated with harvesting cotton when tropical systems arrive in the fall.

“With cotton production, we can’t do anything to prevent damage to the crop from hurricanes. The only thing we can do is spread our risk so that our entire crop isn’t entirely vulnerable to one storm. In Georgia, we’ve got a really wide planting window and that allows us to potentially spread out our harvest,” Whitaker said. “This particular work was centered on spreading our harvest on the early side and actually harvesting a portion of our crop well ahead of peanut harvest.”

The majority of Georgia farmers who plant cotton also produce peanuts. Producers are forced to harvest peanuts in a timely manner due to potential yield losses. Whitaker said cotton is a much more forgiving crop and timing of harvest is usually not as critical to crop success. Whitaker’s research examines how much a farmer can move harvest up in the season relative to how much it impacts the crop’s profitability.

“The benefit of seeing how early we bump up those planting dates is that maybe we can spread that risk out, so if a hurricane does come, we don’t have all our cotton impacted at the same time,” Whitaker said. “However, Georgia cotton production has not been tailored for early harvest and some issues need to be addressed to see if these efforts are worth it.”

As a result, Whitaker harvested cotton in August for the first time in his career.

“Last year was the dagger, but if you think about it, we had Irma in 2017 and we had Matthew the year before,” Whitaker said. “It’s something that everybody’s thinking about and this is one of the ways we’re dealing with it.”

Whitaker is conducting research on three sites this year and plans to continue this research next growing season.

“I think we can push cotton harvest up a month earlier than what some farmers are actually doing. The longer the cotton’s out there, the more risk you have,” Whitaker said. “The quicker you can get it out, the better.”

Before Hurricane Michael moved through Georgia on Oct. 10-11, 2018, only 12% of Georgia’s cotton crop had been harvested, according to USDA estimates cited by UGA cotton economist Yangxuan Liu. This meant that the majority of the crop was susceptible to the hurricane’s destructive winds.

According to estimates from Liu and fellow UGA Extension agricultural economists, the farm gate value loss for cotton as a result of Hurricane Michael was between $550 million and $600 million. This includes losses related to cotton lint, cottonseed and reductions in fiber quality.

Cotton is the largest row crop produced in Georgia. According to the USDA, the farm gate value for Georgia-grown cotton and cottonseed in 2017 was $867 million, with more than 1.2 million harvested acres.

For more information on cotton production in Georgia, see http://www.ugacotton.com.