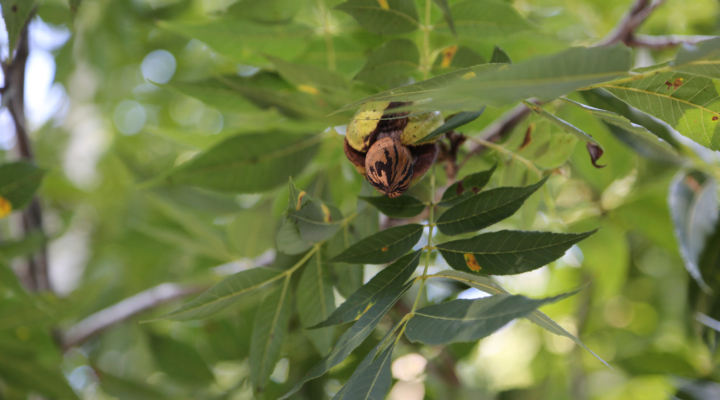 The University of Georgia College of Agricultural and Environmental Sciences (CAES) is part of a collaborative effort to develop a smart irrigation application for pecan farmers on smartphone devices. (photo by UGA CAES/Extension, creative commons/flickr.com)

TIFTON, Ga. — The University of Georgia College of Agricultural and Environmental Sciences (CAES) is part of a collaborative effort to develop a smart irrigation application for pecan farmers on smartphone devices.

CAES, along with the Flint River Soil and Water Conservation District and the U.S. Department of Agriculture (USDA) Natural Resources Conservation Service, are developing an app that will help growers increase pecan yields by using less water, according to Bill Liakos, assistant research scientist who is working with precision agriculture specialist George Vellidis on several similar projects on the UGA Tifton campus.

“Smart irrigation is the new method of irrigation where you use technology and information and make more accurate and faster decisions,” Liakos said.

The app for pecans, which is part of a two-year project, is still in the planning stages but will be released on both iOS and Android devices when finished. It’s the latest in a series of apps that UGA scientists, along with colleagues from the University of Florida, have released for various crops to help producers schedule irrigation more efficiently. Other crops include cotton, citrus, strawberries, vegetables and residential turfgrass.

Liakos said an app for blueberries will be finalized in the upcoming weeks.

“The apps require accurate rain data to perform well. If those data are available, then the user can expect significant improvement in their water use efficiency,” Vellidis said.

Currently, pecan producers use subsurface irrigation systems, and many farmers have many acres spread out over multiple orchards. Because these irrigation systems must be turned on and off manually, this practice can be very time consuming and possibly unnecessary if the app recommends otherwise.

If an app was available, growers would know when to schedule an irrigation event and for how long.

“Everyone has a cell phone now, and a useful app such as this has the potential to save growers money and make it easier for them to be good stewards of the water resources we all depend on,” UGA Cooperative Extension pecan specialist Lenny Wells said. “Pecan water use changes throughout the season. It’s relatively low early in the season and increases as the crop progresses. In the final month and a half of crop maturation, the water demand for pecans can be quite high.”

Liakos said that the pecan app will use weather data from local and national weather data sets to forecast an irrigation schedule for the next seven days.

“More or less, farmers will know how much water is going to be used daily by trees,” Liakos said.

According to Wells, irrigation is the single most important factor in producing pecans. South Georgia farmers had to pay particularly close attention to irrigation management this fall during a prolonged dry period that spanned almost two months. If growers didn’t manage irrigation properly, they will likely see the impact during this year’s harvest season with lower yields and a reduction in quality.

“There is no other input you can apply to pecans that will generate the returns that irrigation does. I tell growers all the time that if you have to choose between fertilizer and water, choose water,” Wells said. “Even with irrigation, when we have extended dry periods, you can have problems like we see this year — some early sprouting of nuts on the tree and a little nut abortion. But when you have dry weather in September without irrigation, you can have almost a total crop failure even if things looked great until then.”