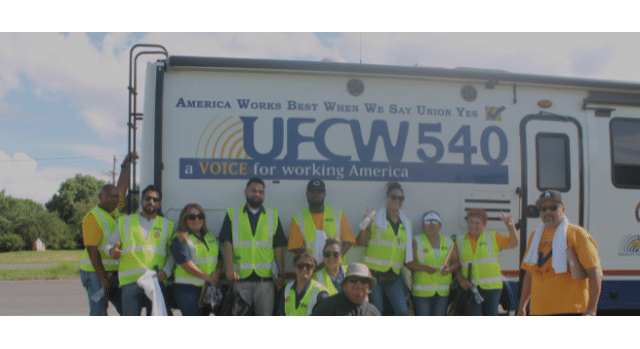 WACO, Texas — United Food and Commercial Workers (UFCW), the union for over 33,000 Texas food and retail workers statewide, announced that over 400 Texas poultry workers at the Pilgrim’s Pride plant in Waco have voted overwhelmingly to unionize and joined UFCW Local 540, the largest union for food workers in the region. As new members of UFCW Local 540, these Waco Pilgrim’s Pride workers will soon form a bargaining committee to negotiate their first union contract to strengthen pay and benefits, as well as workplace safety protections, which are vital as COVID Delta Variant cases surge across Texas.

“Texas poultry workers at this Waco Pilgrim’s Pride plant are sending a powerful message that workers have a stronger voice on the job when they stand together. These workers joined UFCW Local 540 because they are ready to stand up for the better pay, increased benefits, and improved working conditions that come with a strong union contract.

“Essential workers in Texas and across the country in meatpacking plants have been on the frontlines of the pandemic since day one, putting their health at risk to make sure our families can put food on the table during this health crisis.

“Pilgrim’s Pride respected the right of these workers to unionize and stayed neutral throughout this campaign. At a time when giant corporations like Amazon are spending millions of dollars to stop their workers from exercising their right to join a union, Pilgrim’s Pride did the right thing by staying neutral, setting a powerful example for other companies in Texas and nationwide.

“UFCW Local 540 looks forward to working with Pilgrim’s Pride on negotiating the first union contract for these Waco poultry workers as they stand together to strengthen these essential jobs.”