Home / Florida / UF scientists sequence genome of the supersweet corn
A new user experience is coming! We'll be asking you to login to your Morning Ag Clips account March 1st to access these new features.
We can't wait to share them with you! Read more here. 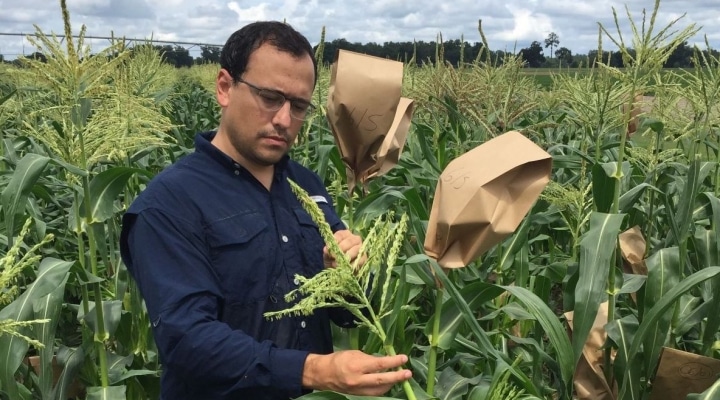 Sweet corn, a food favorite for many consumers, serves as a major crop for Florida. Earlier research by UF/IFAS scientists led to an even sweeter sweet corn dubbed “supersweet” because it has more sugar than other types of the staple crop. (photo by Marcio Resende, UF/IFAS)

GAINESVILLE, Fla. — Sweet corn, a food favorite for many consumers, serves as a major crop for Florida. Earlier research by UF/IFAS scientists led to an even sweeter sweet corn dubbed “supersweet” because it has more sugar than other types of the staple crop.

Now, a University of Florida scientist is laying the genetic groundwork for better sweet corn varieties. For the first time, Marcio Resende, a UF/IFAS sweet corn breeder, led a team of researchers to sequence the genome of a type of supersweet corn.

Through his genome assembly work, Resende said scientists can use this information to contribute to novel breeding methods, as well as to learn more about the biology and history of sweet corn.

“This is expected to translate into better varieties for farmers and consumers,” said Resende, a UF/IFAS assistant professor of horticultural sciences.

For the study, published in Nature Communications, Resende chose a variety that represents the foundation of supersweet corn in the United States.

He and his colleagues used several technologies to reconstruct the sweet corn genome. By using these techniques, the scientists learned the exact structure of the natural mutation of the gene that creates supersweet corn, and therefore higher sugar content.

Researchers extracted DNA from a plant grown in the greenhouse and sequenced the genome using a platform that reads DNA fragments of about 15,000 base pairs. Think of those base pairs as letters.

The genome has about 2 billion base pairs, so scientists used HiPerGator, the University of Florida supercomputer, to piece these sequenced fragments together, Resende said. In addition to bioinformatics, Resende and his team relied on two additional tools, known as Optical Mapping and

Hi-C Mapping. They both helped unite the sequenced fragments, resulting in a high-quality genome sequence.

Florida farmers grow more than 37,000 acres of sweet corn annually – mostly in Southwest and Southeast Florida, according to the Florida Farm Bureau. The crop is in season from October to June. Florida also ranks No. 2 nationally in the production and value of fresh market sweet corn, typically accounting for about 20% of national sweet corn production.

Resende describes his new research as building on the revolutionizing work done almost 50 years ago by Emil Wolf, the UF/IFAS sweet corn breeder at the time.

In the 1970s, Wolf developed Florida Staysweet, one of the first supersweet hybrid varieties, which later revolutionized sweet corn production.

“We were now able to sequence the genome of a supersweet corn, which will help us to accelerate the development process of novel varieties,” Resende said “Moving forward, we will analyze the DNA of our current breeding lines and compare them against this genome to select which ones to move forward in the breeding process.”