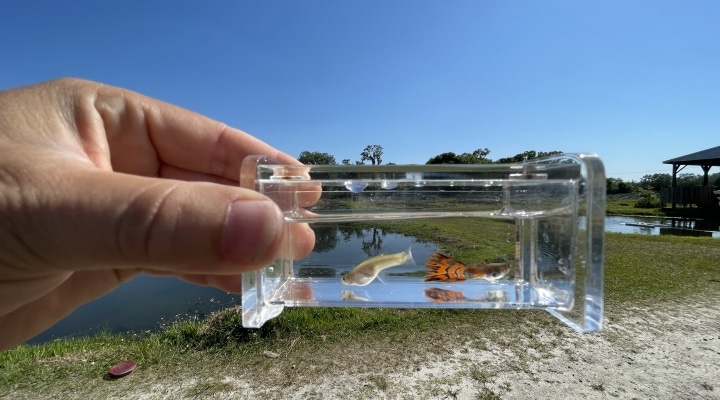 In the battle of mosquitofish against guppies, University of Florida scientists found that the native mosquitofish won, and that’s good for our ecosystems. (photos courtesy, Quenton Tuckett, UF/IFAS)

RUSKIN, Fla. — In the battle of mosquitofish against guppies, University of Florida scientists found that the native mosquitofish won, and that’s good for our ecosystems.

Invasive species are one of the greatest threats to biodiversity as they damage Florida’s ecosystems. Recent University of Florida research shows managing invasive species costs $45 million each year in Florida. Count guppies among the invaders.

A new study led by a UF/IFAS researcher sheds light on the role that native species can play in preventing the establishment of invasive species. After a species is introduced into a new environment, it can “establish” itself by forming a self-sustaining population. But most invaders do not survive.

While this is good, scientists want to know why. If they understand why an invasive species fails to establish, it helps them understand how they can prevent other invaders from surviving.

So, UF/IFAS researchers examined guppies and mosquitofish to find out.

Quenton Tuckett, an assistant research scientist at the UF/IFAS Tropical Aquaculture Lab (TAL) in Ruskin said scientists spend considerable effort studying successful invaders. For example, they want to know what allows invaders to survive and even thrive and how we can minimize the damage they cause. About 90% of species that are introduced into a new ecosystem do not establish themselves. They die.

“These failed introductions often go unnoticed, yet they offer valuable insights into what determines the success of an introduction,” said Tuckett, lead author on the new study, published in the journal Ecology.

Tuckett and his team led research into the guppy (Poecilia reticulata), a widespread invasive species native to northern South America.

Thanks to its popularity as a pet and as a mosquito-control agent, it enjoys an introduced range – a range outside the area where it was historically found — that spans six continents and more than 70 countries.

“Despite this remarkable success, there are notable places where guppies seem unable to establish despite ample opportunity,” Tuckett said. “One such anomaly is southern Florida. Guppies have been bred in outdoor ponds around the Miami and Tampa areas for decades, and they should be well-suited to the climate. Florida also supports a large number of tropical, invasive, freshwater fish. Fish experts have long been puzzled by the absence of guppies from Florida’s waterways.”

Tuckett and his team set out to solve this mystery.

The scientists recreated typical habitats where guppies could be found, and they followed them. They put the fish into outdoor containers, then checked them again months to later to see what happened. Scientists found mosquitofish killed the guppies, even if only a few mosquitofish were involved.

The results confirmed the suspicions of many: that the native mosquitofish (Gambusia holbrooki) provides what scientists call “biotic resistance,” or the ability of a collection of species to resist an invasion.

They found that mosquitofish killed guppies. This work has important implications for invasive species management in Florida and elsewhere.

“We need to take potential biotic resistance into account when assessing the risk posed by a particular species in a novel environment,” Tuckett said. “For example, although highly invasive on paper, the guppies seem to pose very little threat to places like Florida where another species consistently prevents their establishment.”

More broadly, in terms of invasion biology, the prevailing wisdom has been that habitat suitability is the most important factor in whether a non-native species succeeds or fails in a new environment.

“The findings of this study challenge this assumption, highlighting the overlooked importance of species interactions in determining invasive success,” Tuckett said. “It also opens the door to a better understanding of failed invasions. Rather than being unique, the guppy-mosquitofish system may be just one of many where strongly interacting species lead to population extinction and invasion failure.”

Other researchers on the study were Amy Deacon, a lecturer in zoology at the University of the West Indies in Trinidad and Tobago; Douglas Fraser, a professor emeritus at Siena College in New York; Timothy Lyons, a UF/IFAS College of Agricultural and Life Sciences alumnus who earned his master’s degree studying at TAL; Katelyn Lawson, a GIS analyst at Auburn University and Jeffrey Hill, a professor of fisheries and aquatic sciences at TAL. 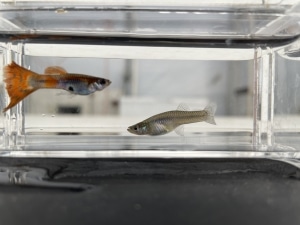