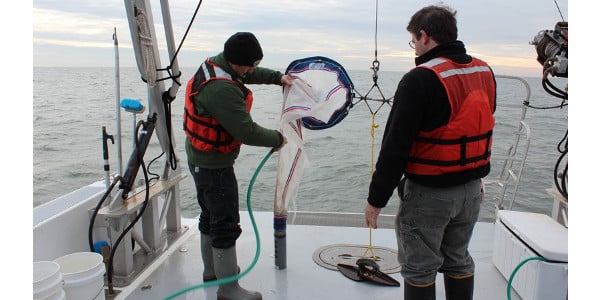 Researchers conducting a planned University of Florida-led study on plankton in two lagoons of the Florida Keys stumbled upon an unexpected presence in the course of their routine sampling: microplastics. (file photo by Jonathan Cohen)

GAINESVILLE, Fla. — Researchers conducting a planned University of Florida-led study on plankton in two lagoons of the Florida Keys stumbled upon an unexpected presence in the course of their routine sampling: microplastics.

A new publication in the journal Scientific Reports details the discovery of “widespread presence of high concentrations of polystyrene microplastic particles” in the two lagoons, northeast Florida Bay and Barnes Sound. This is the first report of its kind for the area.

While macroplastics represent the more visible side of plastic waste, the study notes, microplastics – which are defined as particles less than 5 millimeters in diameter – may also contribute to environmental stresses. The particular type of plastic found in this sampling, polystyrene, is commonly used in foam cups and food clamshell containers, per a UF/IFAS Extension fact sheet.

Ed Phlips, a lead researcher on the study and professor in the UF/IFAS School of Forest, Fisheries and Geomatics Sciences, said it was the sudden, highly abundant presence of microplastics in the samples that came as a surprise. The study was conducted over two years, from May 2018 to April 2020, across 10 sample sites.

“It wasn’t until about ten months into the sampling that we first came across microplastics,” he said. The publication notes the first appearance at six sites in March 2019, followed by observances at all 10 sites two months later. “The microplastic particles were present at all sampling sites for months, until tapering off toward the end of our study.”

Phlips said there is insufficient information to confirm why the microplastics appeared so suddenly, or what caused them. The publication indicates the particles were likely secondary microplastics, or the result of degradation of larger debris, presenting a wide range of possible sources of the microplastics.

“For example, the study period was not long after Hurricane Irma,” Phlips said, referring to the category 5 hurricane that impacted almost all of Florida’s peninsula in September 2017. “It’s possible the movement of materials caused by that storm could be related to the appearance of these microplastics, but there’s currently no way to pinpoint the source.”

The densities of the microplastics were similar to the abundances of microplanktonic algae, according to the study. The microplastic particles fell within the same size range as microplankton, 20-200 micrometers. Phlips said that these observances are notable for their potential ecological effects, since microplankton fulfill a key role in marine food webs.

“It’s important for us to look at the microscopic level to determine the health of these water bodies,” Phlips said of his statewide research. “While surprising, the discovery of microplastics in an area where they had not been previously reported gives us a better picture of a potential issue of concern for these lagoons, and now we can pay better attention to this factor.”

Floridians who are interested in learning more about microplastics can participate in the Florida Microplastic Awareness Project, a UF/IFAS Florida Sea Grant educational program for all ages. One component involves volunteer community scientists who collect coastal water samples and filter them to look for microplastics. Learn more about this initiative at flseagrant.ifas.ufl.edu/microplastics.