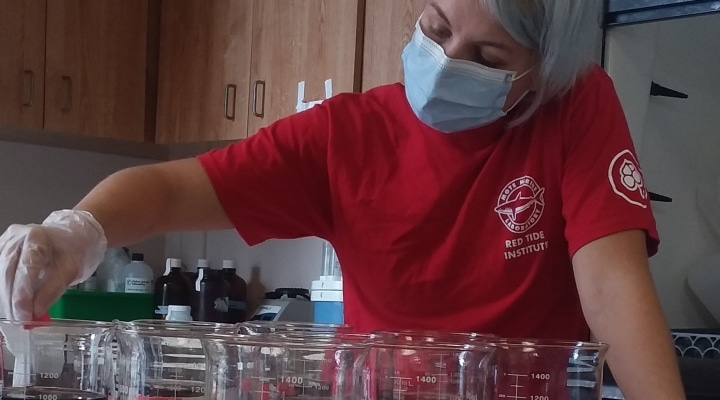 GAINESVILLE, Fla. — Not all algal blooms are harmful, but Amanda Muni-Morgan hopes to eventually mitigate the impacts of nutrients going into Tampa Bay. Those nutrients – often brought to the estuary by stormwater runoff — can fuel a harmful algal bloom.

As part of her research, Muni-Morgan will use a high-resolution spectrometer to zoom in on nitrogen compounds in runoff, down to the molecular level.

Muni-Morgan, an interdisciplinary ecology doctoral student in the UF/IFAS College of Agricultural and Life Sciences, starts her Ph.D. research on harmful algal blooms this summer.

For her research, Muni-Morgan will take a close look at Karenia brevis, a harmful algal bloom species that blooms every year along Florida’s Southwest coast. Karenia brevis is responsible for Florida’s red tides. It poses danger because it can release toxins into the water and in the air through sea spray. Toxins can kill fish, marine mammals, sea turtles and birds.

Even humans can be exposed to toxins by eating contaminated shellfish and by breathing toxic aerosols that result from a bloom at the beach. This can result in digestive issues and respiratory irritation.

Her project will expand on preliminary research from Fall 2019 performed by Mary Lusk – her UF/IFAS faculty advisor — and Cynthia Heil from the Mote-Marine Laboratory & Aquarium in Sarasota. The study led by Lusk and Heil showed that Karenia brevis utilizes many dissolved organic nitrogen compounds found in Sarasota stormwater retention ponds and in Manatee County wastewater.

While some people assume that fertilizers are the major source of nitrogen getting into Florida’s waterbodies, nitrogen can come from many sources. Those sources include pet wastes, leaf litter and grass clippings left on streets, reclaimed water and natural rainfall, said Lusk, a UF/IFAS assistant professor of soil and water sciences at the Gulf Coast Research and Education Center.

Muni-Morgan will focus on some of these nitrogen sources because dissolved organic nitrogen has been shown in several local studies of stormwater to dominate over inorganic nitrogen from fertilizers.

Muni-Morgan also plans to use a high-resolution mass spectrometer at the National High Magnetic Field Laboratory in Tallahassee to zoom in on molecular structures in dissolved organic nitrogen found in Tampa Bay stormwater runoff. The Tallahassee lab houses the strongest magnets in the world, which allow ultrahigh resolution of chemical compounds in stormwater samples, something that’s never been done before in stormwater that flows into Tampa Bay.

Muni-Morgan’s research will be critical because she’ll focus on lesser-studied nitrogen sources (such as organic nitrogen in rainfall) and because she’ll use the high-resolution mass spectrometer, Lusk said. The spectrometer lets scientists identify tens of thousands of chemical formulas in a single stormwater sample.

“Knowing the specific compounds used by Karenia brevis gets us one step closer to connecting algal growth to specific sources in the watershed,” Lusk said. “This work will help us better constrain exactly where the nitrogen is coming from, so we can target those sources. It may also help us design filters or artificial media that could be added to a pond or bioretention basin to remove specific nitrogen compounds.”