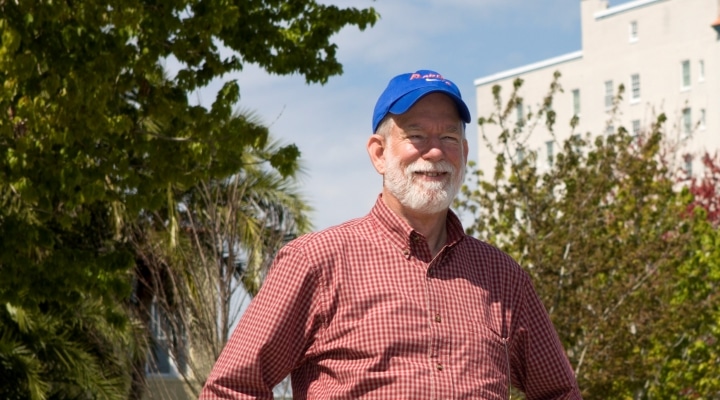 In his 15 years with UF/IFAS, Extension forester Rob Northrop has worked with scientists to bring much-needed tree shade to the Tampa Bay metropolitan area. His work is now being recognized nationally. (photo by UF/IFAS)

SEFFNER, Fla. — In his 15 years with UF/IFAS, Extension forester Rob Northrop has worked with scientists to bring much-needed tree shade to the Tampa Bay metropolitan area. His work is now being recognized nationally.

Northrop takes an ecosystem approach to planting and preserving trees and forests, which includes studying and communicating tree canopy goals in Tampa and surrounding areas.

He and his colleagues in the Tampa Bay Watershed Working Group also assess the ecology of forests in the area.

“My work in the Tampa Bay region is motivated by the need for forest conservation inside our cities and within the rapidly expanding metropolitan regions,” Northrop said. “The work, while almost completely focused on the Tampa Bay Watershed, was always intended to explore this emerging and important form of forest conservation and then provide management guidance to professionals and governments within Florida, the United States and the world.”

Despite all his efforts, Northrop never thought he’d be named an Honorary Member of the national Society of Municipal Arborists (SMA), an honor he received November 19.

“I was very surprised by the award,” said Northrop, an agent with UF/IFAS Extension Hillsborough County. “I did not have any idea that I had been nominated. It is a true honor to receive the award.”

For more than a dozen years, Northrop has helped with research and Extension on the Tampa Bay urban forestry project.

In June 2006, several researchers, managers and Extension foresters, including Northrop and Michael Andreu, an associate professor and Extension specialist in the UF/IFAS School of Forest Resources and Conservation in Gainesville, facilitated the formation of the Tampa Bay Watershed Forest Working Group to create a scientific framework to assess the ecology and sustainability of the Tampa Bay Watershed’s trees and forested ecosystems.

Northrop deserves the honor, said Andreu, who was effusive in his praise of his colleague.

“We started out working on addressing urbanization and forest ecosystems in the Tampa Bay Watershed Area,” Andreu said. “Over time, our work has expanded to be valued by the urban forest community around the state, country and internationally.”

Andreu and Northrop recently presented their work on urban forest management through the Arborist Association of the United Kingdom..

“His work is impacting how urban forests are viewed globally and, given that the United Nations stated that for the first time in history, more humans live in cities than in rural areas globally, that is a big deal,” Andreu said. “I think Rob’s greatest strength is his ability to take a big idea and weave it into a story that we can all understand. He can translate science and policy in a way that is understood by the lay audience. He is the consummate agent of Extension and embodies all that the Land Grant mission is about.”

Northrop credits his honor to the people he works with the Tampa Bay Watershed Forest Working Group.

The program unites researchers from the biological, physical and social sciences to collect new data and synthesize existing information to better understand the watershed’s forest as an ecological system and how the ecosystem is changing over long periods and better manage and conserve the forest.

Honorary Membership in the SMA is given for substantive contributions of non-members to the society’s mission, to recognize continuing commitment and outstanding service to advancing municipal arboriculture and urban forestry, said Steve Cothrel, chair of the SMA Awards Committee.

“The awards committee confirmed that Rob was well-respected and particularly influential in the Southeast United States and internationally, which is a growth area for the society,” Cothrel said. “The committee was especially impressed with his Extension work in tree recovery after storms, green stormwater infrastructure and ecosystem approaches to urban forestry, including the study and communication of tree canopy goals in Tampa and surrounding areas.”