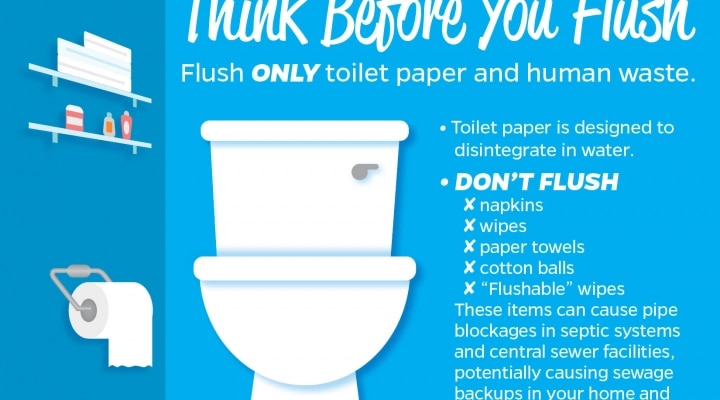 If you’re on a septic system, what happens after you flush your toilet? In a new, statewide UF/IFAS Extension program aptly titled “After the Flush,” Mary Lusk and her colleagues aim to teach Floridians how the state’s 2 million septic systems can impact water resources. (photo by UF/IFAS)

BALM, Fla. — If you’re on a septic system, what happens after you flush your toilet? In a new, statewide UF/IFAS Extension program aptly titled “After the Flush,” Mary Lusk and her colleagues aim to teach Floridians how the state’s 2 million septic systems can impact water resources.

For one thing, septic systems can put nitrogen into groundwater, water bodies and sewage systems. So, as a major goal, Lusk uses “After the Flush” to teach septic tank owners how that nitrogen can potentially impair the state’s waterbodies, especially springs, and what our options are for reducing nitrogen release from septic systems.

UF/IFAS Extension agents, counties, cities and others can use the toolkit to teach residents how septic systems work, how they can pollute water and how residents can get advanced nitrogen-removing technology to upgrade their system. That way, it reduces the amount of nitrogen that enters groundwater and springs.

Lusk received a grant from the Fish and Wildlife Foundation of Florida to develop this educational program, and she and other UF/IFAS Extension faculty piloted the program in Pasco, Hernando and Wakulla counties. The project is now available across Florida.

“Basic septic systems were originally designed because we recognized a need to treat wastewater from our homes in a sanitary way, thus protecting public health,” said Lusk, a UF/IFAS assistant professor of soil and water sciences. “A century ago, no one thought much about nitrogen.”

“People thought about public health and keeping human waste and associated pathogens away from people, somehow,” she said. “Septic systems do a great job of this. But they do not remove much nitrogen unless they incorporate some modern nitrogen-removing technology, and very few existing systems in Florida have this technology.”

“After the Flush” stems from 2016 legislation. That Florida Water Bill created the Florida Springs and Aquifer Protection Act. Among other things, the act required the state to develop management plans to improve water quality in Florida’s first magnitude springs, almost all of which are impaired by excess nitrogen.

The law also requires that if 20% or more of a spring’s nitrogen comes from septic systems, local governments must teach residents about the impact of their septic systems. That includes educating people about how their systems can contribute nitrogen to springs and how septic systems work. It also means teaching the public about the advanced nitrogen-removing technologies available for homeowners.

“So if I dump something on the ground in my backyard, and the nature of the soils and hydrology allow it to eventually flow into a spring, then my backyard is part of the spring watershed — sometimes called a ‘springshed,’ ” Lusk said. A spring watershed is all the land that delivers groundwater flow to a given spring.

State regulators use a computer model, based on land use and research, to estimate where nitrogen is coming from and how much.

Lusk describes the computer model as “an extremely useful tool in that it allows us to get the train out of the station, so to speak, and put some numbers on how much nitrogen we think is entering each spring and where it is coming from. Once we have ideas of where it is coming from, we can create appropriate management options.”