Home / Florida / UF/IFAS plows forward to breed and grow a ‘superfood,’ the pomegranate 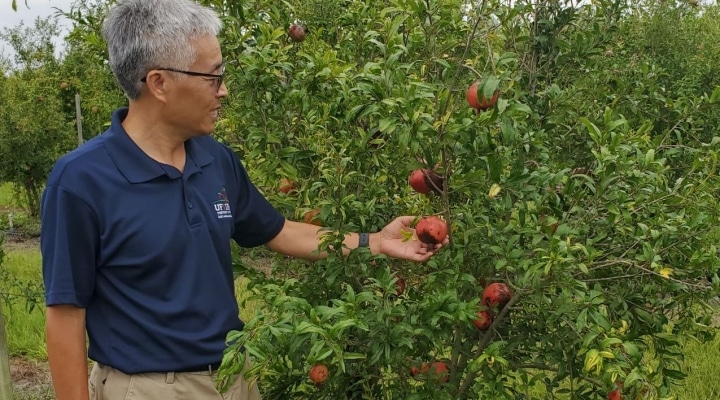 GAINESVILLE, Fla. — Pomegranates are sweet, juicy and one day they could grow abundantly in Florida. They taste good, and they’re full of nutrients, including antioxidants.

“The fruit and its products such as arils and juice are rich in phytochemicals and are considered a ‘superfood,’” said Zhanao Deng, a University of Florida environmental horticulture professor who’s trying to breed and grow more pomegranates in Florida. A so-called ‘superfood’ is a general term referring to food rich in nutrients.

It’s not necessarily a huge transition from growing citrus to producing pomegranates, Deng said. Farmers can use the same orchards, equipment and facilities they use for citrus.

“We can produce fresh pomegranate fruit, arils and juice in July, which is at least two months earlier than growers in other states,” said Deng, a faculty member at the UF/IFAS Gulf Coast Research and Education Center (GCREC).

Many Florida farmers are practically banking on Deng finding success in his scientific quest to grow and breed pomegranates that will go to market earlier than the fruit that comes from other states.

Locally grown pomegranates are scarce right now in the Sunshine State. The fruit grows on only about 100 acres statewide.

Since 2014, Deng has been trying to grow and breed pomegranates at the GCREC in Hillsborough County. It’s slow, steady progress, akin to much of science – and farming for that matter.

Mostly, Deng is studying how to make sure pomegranates can resist or avoid pests and diseases and not drop fruit on the ground. Those research victories would mean more yield for Florida growers. Eventually, he’d like to make the fruit even tastier. All of this requires field trials and laborious breeding.

Interestingly, this would count as a re-emergence of pomegranates. They’re not new to Florida.

“Although pomegranates are an emerging specialty crop in Florida, they have been grown in Florida for more than 100 years,” Deng said “Decades-old pomegranate trees have been found in the backyards of Floridians. As a matter of fact, Wonderful ™ pomegranate, the variety that is most widely grown in the U.S., originated in Florida about 125 years ago.”

The pomegranate tree is native to a region from modern-day Iran to norther India. In the United States, about 90% of pomegranates grow in California. Florida’s wet season and its hot weather pose challenges to growing pomegranates.

“In Florida, pomegranates can grow well but tend to have a lot of fruit rot from a number of fungal pathogens,” Deng said. “This results in low yield and poor fruit quality.”

To avoid severe fruit rot, Deng and his doctoral student, Alexander Schaller, defoliated the pomegranate plants at GCREC in December 2020, hoping to harvest ripe fruit soon after the rainy season begins in Florida, usually in June. To their surprise, this treatment not only has advanced the harvesting season to July but has made the plants produce a lot of more fruit.

Last week, Deng hosted Cindy Weinstein, president of the Florida Pomegranate Association, who wanted to see the fruit in the Deng’s research field. Pomegranates normally mature in August and September in Florida, said Weinstein, who owns a farm in Hardee County.

“The sweetness and maturity of Dr. Deng’s fruit this time of year is fantastic,” she said.  “Having mature pomegranates in June and July would greatly limit the use of fungicide. Having the fruit off the trees before the heavy rains of a hurricane season is a plus. Mature pomegranates in June and July will introduce fruit to the market early and extend the fresh pomegranate season in the United States. If pomegranates grow successfully in Florida, they’ll be on more specialty crop that producers can count on. The more you can choose from the better your chances of a good yield.”

Where does Deng go from here in his quest to help to get more Florida-grown pomegranates to your market?

“We will further refine our horticultural practices, and we’ll test different varieties, hoping to advance the pomegranate harvesting season to mid to late June,” Deng said. “We are developing a new generation of pomegranate varieties that are better adapted to Florida’s climate, have better resistance to fruit rot and other diseases, and can produce high quality of fruit so that Florida growers can grow pomegranates as an alternative fruit crop profitably.”

Deng thanks the USDA Specialty Crop Block Grant Program, the Florida Department of Agriculture and Consumer Services (FDACS) and the California Department of Food and Agriculture for funding the pomegranate trials and breeding. The Florida Pomegranate Association also has supported this project by donating plants and funding.