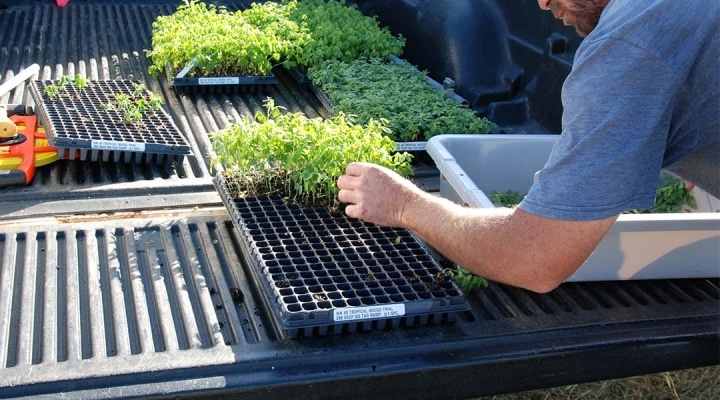 Scientists at University of Florida Institute of Food and Agricultural Sciences (UF/IFAS) have just completed a series of field trials sponsored by Tennessee-based company Stony Creek Colors that took two years. Their tests could make growing the indigo plant – which produces the iconic natural blue dye -- a profitable and environmentally sound crop in the Sunshine State.  (photos by UF/IFAS photography)

HOMESTEAD, Fla. – Synthetic dyes are taking a back seat as consumers and manufacturers are driving increased demand for natural dyes with agriculture at the wheel.

Take the indigo blue color, for instance. It has been an international icon for centuries that captivated the textile, fashion and agriculture industries. Where would blue jeans be were it not for indigo, for example? For the last century, however, synthetic dyes stepped into the market, reducing the demand for growing the plant transitioning its agricultural demand into the back seat – until now.

Scientists at University of Florida Institute of Food and Agricultural Sciences (UF/IFAS) have just completed a series of field trials sponsored by Tennessee-based company Stony Creek Colors that took two years. Their tests could make growing the indigo plant – which produces the iconic natural blue dye — a profitable and environmentally sound crop in the Sunshine State.

The field trials tested the viability of growing the ancient indigo species in South Florida. The results give interested growers and manufacturers of natural dyes new hope as a revival for the demand of natural indigo dyes resurface at a global scale.

“The cycle of indigo production is short, which makes it more cost effective for farmers,” he said. “Indigo doesn’t require a lot of water or fertilizer, as opposed to other crops that need large inputs in terms of constant irrigation and fertilizer. It’s a win-win.”

The results are the first signs of what could prove to be an environmentally friendly crop. It also has the signs of serving as a beneficial and cost-effective rotation crop, which is the practice of planting different crops on the same plot during different times of the year

“With our results, it seems we now have confirmation that indigo is suitable for South Florida,” Vendrame said. “We know the plant grows well and is a good performer. I think the next steps are to move forward with a more targeted breeding program to develop cultivars specific for the state.”

Indigo produces a natural dye, which is extracted from the leaves. This species of indigo was historically produced in South Asia and America. The plant can be grown as a perennial, meaning it does not need to be replanted every year. It can also be mechanically harvested now.

In recent years, interest and demand have increased for sustainable production of natural dyes and colorants, as synthetic dyes are non-renewable and are typically made from toxic or carcinogenic input chemistries such as aniline. The cultivation of indigo may provide growers and farmers in a variety of climates with an alternative crop of commercial value and interest.

Meanwhile, new technologies-in-the-making, which are designed for farmers to process and efficiently stabilize the indigo leaves before the product leaves the farm gate, may provide potential growers a way to meet the emerging demand for the iconic natural dye.

Natural dye manufacturers like Stony Creek Colors in Tennessee, recognize the advantages transitioning from petroleum-based dyes to plant-based color for both the environment and for the fashion brands responding to consumer demand for “cleaner” clothing made without harmful chemicals. The company has been contracting with growers in Tennessee and Kentucky over the past several years to scale up USA manufactured plant-based indigo.

“Today, nearly all denim is dyed with synthetic indigo made from petrochemical resources and toxic inputs like cyanide.  There are very few producers of true, plant-based blue,” said Sarah Bellos, whose company sponsored the trial. “The Indigofera plant is still cultivated in small amounts in El Salvador, Honduras, India and Bangladesh. Consumers and manufacturers are looking at sustainability, performance and scalability. Stony Creek Colors has been focusing on advancing the methods for natural indigo growing and processing, to make it suitable to replace synthetic indigo in industrial denim dyeing.”

With that in mind, Bellos, turned to Vendrame and others at UF/IFAS to test the crop’s feasibility for a sponsored field trial specifically for South Florida. The first trials took place in Homestead in December 2018, followed by a second experiment in January 2019 that ended in December 2020. The company chose the Homestead UF/IFAS location due to the opportunity to extend the growing season for the crop.

After a year of observations on growth characteristics, Vendrame worked with Stony Creek Colors to determine which individuals out of the thousands of plants grown produced the highest levels of the compound that yields the indigo blue chemical. The team selected the best performers for continued studies and transitioned the program into a seed production site. A portion of the project was facilitated by a Small Business Technology Transfer grant Stony Creek Colors received from the National Science Foundation.

Commercially, Stony Creek Colors contracts with farmers who produce this transplanted crop, with the company providing the seedling in early Spring. Once rows of indigo are planted, they grow and are mechanically harvested every few weeks throughout the year. At U/IFAS the plant attracted plenty of bees and pollinators and no pests. Weed control was a small issue, but if there was oversight, weeds were manageable. Additionally, the species has a sweet aroma.

The next step is to look for the first pilot stages to get some on-farm data for South Florida, said Vendrame.

“We are ready to expand our commercial sourcing beyond Tennessee into South Florida,” added Bellos. “We want growers who are interested in growing an alternative crop and can dedicate at least 100 acres to the crop.”

Interested growers can contact Geoffrey Meru, an assistant professor of vegetable breeding, genetics and genomics at UF/IFAS Tropical Research and Education Center at gmeru@ufl.edu for more information on the trials and process, or visit www.stonycreekcolors.com

Detect nutrition changes before you can see cow effects