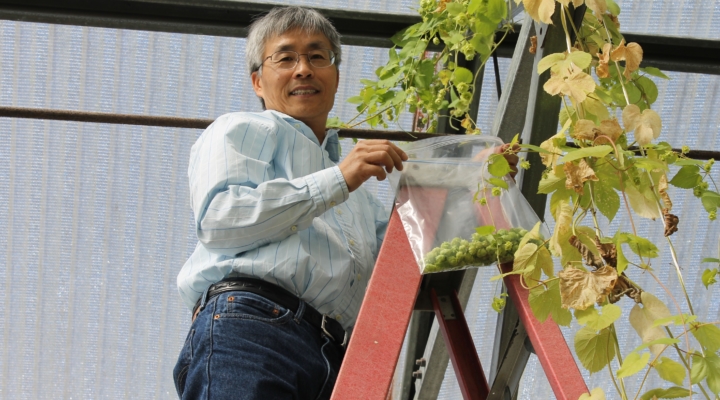 GAINESVILLE, Fla. — University of Florida scientists believe they can control some nematodes that can harm or even kill plants as they try to grow hops to help quench the ever-growing demand for craft beer.

Zhanao Deng, a professor of environmental horticulture and Shinshuke Agehara, an assistant professor of horticultural sciences, are trying to grow hops at the Gulf Coast Research and Education Center in Balm, Florida, part of the UF Institute of Food and Agricultural Sciences.

Deng and Agehara hope to see a viable hops crop so growers can meet the increasing consumer taste for craft beer. There were 195 craft brewers in Florida in 2016, and their economic impact was $3.074 billion, according to statistics from www.brewersassociation.org.

Johan Desaeger, an assistant professor of nematology, also at GCREC, found stunted plants in the hop yard at the center. That’s often a sign of root-knot nematodes, so Desaeger took the pests from the soil and sent them to the state Division of Plant Industries (DPI), which confirmed his suspicions. State scientists identified them as Javanese root-knot nematodes, a very common species in Florida soils.

Desaeger has already suggested short- and long-term solutions to the potential of root-knot nematodes damaging the emerging hops crop.

Soil fumigants can be applied prior to establishing a hop yard, but this will only give short-term relief and will not protect perennial crops like hops long enough, Desaeger said.

“Our focus is on finding cultivars that are resistant or tolerant to the nematodes, and that’s what we are focusing on now,” he said. “Some of the cultivars that perform best in our hop yard also seem to have fewer nematodes, which is probably not a coincidence.”

Root-knot nematodes are the most well-known plant parasitic nematodes. They are microscopic roundworms that live in the soil and attack the roots of plants, UF/IFAS researchers say. The extent of the damage they can cause to crops varies by the plant involved.

“We need to recognize that these nematodes can be a problem, so we need to monitor hops plants for nematode presence and/or damage,” Desaeger said.

Existing hops varieties have likely not been selected for nematode resistance, Deng said

“We are glad that some of the varieties in the hop yard can grow quite well under root-knot nematode pressure,” he said.

The Hillsborough County Economic Development Department, a big backer of the hops research, remains optimistic about the ability of UF/IFAS researchers to find a solution for the nematodes and the root knot.

“We have been made aware of nematodes on the hops, and we support the hops research at the center,” said Simon Bollin, agribusiness development manager with the Hillsborough County Economic Development Department.

Desaeger co-authored a paper on the finding. The lead author is Janete Andrade Brito with DPI, a division of the Florida Department of Agriculture and Consumer Services.

Their findings will soon be published in the Journal of Nematology.

4-Hers collect donations for wildfire relief