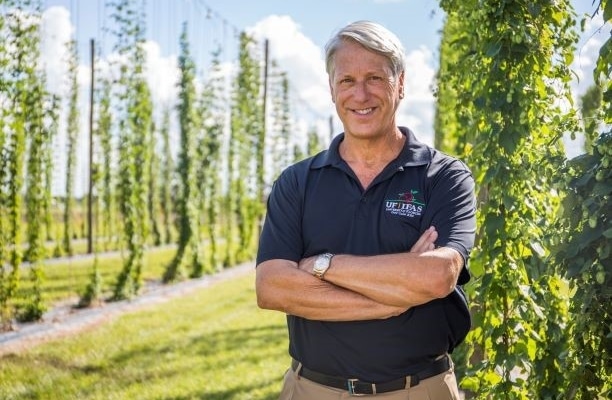 Jack Rechcigl has been appointed center director of the University of Florida’s Fort Lauderdale Research and Education Center (UF/IFAS FLREC), one of 12 research and education centers at the Institute of Food and Agriculture Sciences located around the state. (photo by UF/IFAS)

DAVIE, Fla. – Jack Rechcigl has been appointed center director of the University of Florida’s Fort Lauderdale Research and Education Center (UF/IFAS FLREC), one of 12 research and education centers at the Institute of Food and Agriculture Sciences located around the state.

This position is in addition to Rechcigl’s existing job as director of the Gulf Coast Research and Education Center (GCREC).

His permanent appointment at FLREC is effective July 8, just 13 months after stepping in to oversee the operations and research at the Fort Lauderdale Center as interim director of the facility that had been led by retiring center director Robin Giblin-Davis.

“I am excited to be the new director and look forward to working with the amazing faculty and staff and continue to make this a world-renown research center focusing on urban issues” said Rechcigl. “I hope to inspire new ideas, partnerships with industry and stakeholders and collaboration among our UF/IFAS faculty and units.

Areas of research at FLREC include sustainable management for tropical and subtropical landscape systems. Scientists also aim to reduce the impact of invasive animals and plants on natural and highly urbanized habitats. Other areas of research include termite identification and distribution, wildlife ecology and conservation, palm production and maintenance, environmental horticulture, aquatic plant management, turfgrass science and sea-level resilience in South Florida.

“What distinguishes Dr. Rechcigl as a scientific leader is how hard he works to determine what science is most relevant to the people he serves.” said Scott Angle, UF vice president of agriculture and natural resources. “He sees community members as partners. I expect he will increase opportunities for stakeholders to contribute to a vision for FLREC’s future.”

Rechcigl, who describes himself as open-minded and optimistic, has a vision and mission for his next steps at FLREC.

“I plan to establish an advisory committee for the center composed of stakeholders and local government officials. The purpose of this committee is to provide input and assist the center in developing short- and long-term goals to meet the on-going needs of the Florida agricultural industry,” said Rechcigl. “With input from the new advisory committee as well as the faculty and staff of the center, I will develop a strategic plan to determine the future direction of the center.”

As an internationally recognized professor in the soil and water sciences department at UF/IFAS for the past 34 years, Rechcigl served as the lead architect of the programs and is already the center director of GCREC in Balm, Florida.

The state-of-the-art GCREC operates from two sites. The 475-acre main facility in Balm, located in southern Hillsborough County, hosts most of the center’s research activities, including laboratories, field and greenhouse studies, a diagnostic lab, faculty offices and graduate student housing. The other site is home to the GCREC teaching program (UF/IFAS CALS), based at Hillsborough Community College’s Plant City campus. He oversees 200 employees at the Hillsborough County facilities. They include faculty, biological scientists, staff, undergraduate and graduate students and international interns.

Historically, GCREC has been recognized as a premier research site with efforts since the mid-1920s in tomatoes, strawberries, vegetables, ornamentals and landscape crops.

For 21 years, Rechcigl has led the charge with faculty members in making substantial contributions for the continued production and health of these industries, as well as exploring new opportunities and alternative crops for the region that include pomegranate, blackberry, industrial hemp and hops. Rechcigl has established the highly successful Florida Agricultural Expo, which is attended by 1,000 farmers, politicians, government and university officials from around the country each year.

Research at GREC has also been focused on improving sustainability through the development of precision agricultural technology. Some examples include tractor software that can distinguish crops like tomatoes and strawberries from weeds for precise herbicide application and the use of ultraviolet light to treat and prevent Powdery mildew (Sphaerotheca macularis) on strawberries.

Before joining the GCREC in February 2000 (then housed in Bradenton and Dover), Rechcigl was stationed at the UF/IFAS Range Cattle Research and Education Center at Ona. At the Ona center, he conducted research on the fertilizer requirements of pasture grasses and the effects of fertilizer on surface and ground water quality. This work led to the revision of fertility recommendations and the development of BMP’s for pasture management, resulting in both economic and environmental benefits.

Rechcigl received his bachelor’s degree in plant and soil science from the University of Delaware in 1982. He completed his master’s and doctoral degrees in soil, crops and environmental sciences at Virginia Polytechnic Institute and State University in 1983 and 1986, respectively. He joined the UF/IFAS faculty in 1986 as assistant professor, in 1991 was promoted to associate professor, and in 1996 attained full professorship. In 1999, he was named University of Florida Research Foundation Professor. He is a Fellow of the American Society of Agronomy (1998) and Fellow of the Soil Science Society of America (1999).

Rechcigl has authored over 300 publications and is recognized nationally for his work in the fields of soil fertility, environmental quality, and water pollution. His research has been supported by research grants totaling over $3 million from both private sources and government agencies.

He is currently editor-in- chief of the Agriculture and Environment Book Series, as well as having served as  associate editor of the Journal of Environmental Quality