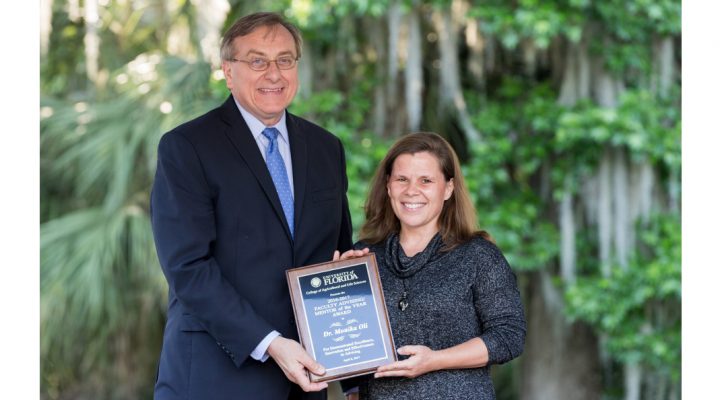 Monika Oli, right, with UF President Kent Fuchs. Oli was previously named the 2012-2013 Undergraduate Teacher of the Year for both CALS and UF. (Courtesy Photo)

GAINESVILLE, Fla. — The University of Florida honored College of Agricultural and Life Sciences (CALS) senior lecturer Monika Oli as the university-wide faculty adviser/mentor of the year at a ceremony held April 6.

Oli serves as a senior lecturer within the CALS microbiology and cell science department. Oli was previously named the 2012-2013 Undergraduate Teacher of the Year for both CALS and UF. She is the only UF faculty to earn both teaching and advising honors from the university, according to records dating back to 2000.

“Promoting excellence in teaching is a top priority of the college,” said CALS Dean Elaine Turner. “CALS is proud to showcase the accomplishments of our faculty and advisers who inspire our students with their passion and creativity. Our microbiology and cell science students are fortunate to have Monika as an exemplary mentor throughout their studies and beyond.”

A multitude of past experiences as researcher, inventor, author and entrepreneur have played a role in how Oli advises and mentors her students. One of her main goals as an adviser is to provide a holistic approach that focuses not only on a student’s academic successes, but also on his or her physical and mental wellbeing. This approach requires individualized attention and career planning.

The success of Oli’s advising philosophy is best articulated by one of Oli’s former students. “She has an ability to see potential in people who are not able to see it themselves. … I cannot think of someone more deserving of the CALS Undergraduate Adviser/Mentor of the Year Award than her,” said Devin Bazick, now a third-year medical student at Ross University School of Medicine.

Oli’s door is always open to students. When walking down the hall of the microbiology and cell science building, it is common to encounter a line of students waiting their turn for her assistance. She has established a peer mentoring system to connect former students with current ones to share experiences and advice. As a testament to her achievements as an adviser, Oli received 19 letters of recommendation from her former students for the award. Some of the most common words students used to describe Oli’s mentorship include, “patient,” “understanding” and “enthusiastic.”

Oli’s leadership, vision and energy for curriculum development have made significant contributions in the variety of course selections available to students. These contributions include the creation of a career development seminar to show students the multitude of career opportunities available in the field of microbiology and cell science. She integrates small research projects into her introductory lab sources, which several students have continued after her course.

“[Oli’s] ability to create student interest in the sciences through innovative, hands-on instruction has a powerful mentoring impact on their career decisions,” said Oli’s colleague in the microbiology and cell science department, Dr. William Gurley.

In addition to Oli’s advising and mentoring award, the following individuals were recognized as CALS’ teachers and advisers of the year:

May is National Strawberry Month