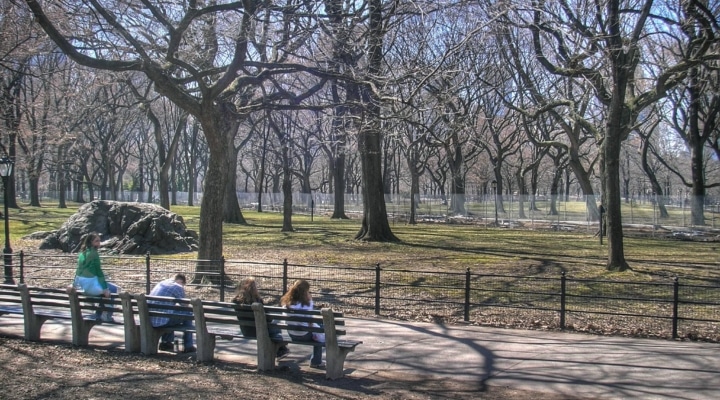 Dutch elm disease is the grim reaper of United States’ elm trees. Since the 1930s, it caused wilt and death for native elm species all over the country, spreading from tree to tree through root grafts or attaching to pollen or seed. Even the iconic elms that once lined The Green on the University of Delaware campus in Newark eventually succumbed. (photo by David Reeves, creative commons/flickr.com)

NEWARK, Del. — Dutch elm disease is the grim reaper of United States’ elm trees. Since the 1930s, it caused wilt and death for native elm species all over the country, spreading from tree to tree through root grafts or attaching to pollen or seed. Even the iconic elms that once lined The Green on the University of Delaware campus in Newark eventually succumbed.

But select survivor trees successfully defied the fungus’ deadly grasp. Now a team from UD is working on a project in conjunction with the U.S. Forest Service to plant these elm trees that can withstand the lethal ailment. For decades, the U.S. Forest Service has bred elm trees tolerant to the deadly fungus. Elms were reintroduced in forests, but the UD team is studying the success of the iconic American tree in harsh urban environments.

“These cultivars (plant varieties) are bred from survivor elm trees or disease tolerant varieties developed by the U.S. Forest Service. There are some old American elm trees that have been exposed to Dutch elm disease over and over and over again, but survive,” said Tara Trammell, John Bartram Assistant Professor of Urban Forestry. “My role is figuring out ideal places to plant trees in urban environments across different levels of human development found in cities throughout the U.S.”

The trees are native, meaning they support local biodiversity — like local insect and thus bird populations — significantly better than non-native tree species like Bradford pear, which are often planted in cities. She’s selected locations along a range of urban intensity — based on nearby impervious surfaces and heat exposure. Trammell is coordinating with forest service scientists in Delaware and Pennsylvania and a research laboratory in Ohio; they planted three different varieties of the most tolerant elms in each of the three states.

“We want to introduce these trees to locations where elms used to thrive,” said Trammell, whose research focuses on how biophysical and sociological factors affect the urban ecosystem. “We’ll look at the trees’ growth, response to soil conditions and above ground conditions, and survivorship over time.”

“Besides providing the kinds of ecosystem services that all trees do, American elms are excellent hosts for the insects that feed native songbirds,” D’Amico said.

Such an endeavor takes a great deal of planning and execution, so Trammell recruited graduate student Danielle Mikolajewski. The first-year master’s in plant and soil sciences student personally drove to Ohio to pick up the trees. In Newark and Philadelphia, she oversaw the planting of every tree. To pull it all off before the weather turned, Mikolajewski played maestro to undergraduate students and volunteers; she juggled the needs and schedules of the Columbus research laboratory, Philadelphia Horticultural Society, U.S. Forest Service and the many organizations with ownership over each location. In every place that a tree was planted, she collected samples to study soil nutrients, bulk density, and pH and sent the soil samples to be tested for the presence of heavy metals, which are often present in urban locations.

“When we started tree planting in October, I realized how physically taxing ecology work can be,” said Mikolajewski, who also has her undergraduate degree in plant science from UD. “I was in the plant pathology and genetics world and I’ve moved more into ecology discipline. It’s been a lot of new information. I moved from more quantitative analysis as an undergraduate to more qualitative analysis in my first semester of as a graduate student.”

In Newark, the trees were planted in or near places such as UD’s Science Technology and Research (STAR) Campus, the UD Farm, Russell Hall, Amy du Pont Music Building, the Newark Reservoir and downtown Newark.

The UD team will conduct annual measurements on each of the elms and evaluate the trees’ progress, including growth and how much stress a tree is under.

Connecting to the classroom
Trammell teaches the experimental course Urban Forestry (PLSC367) and, to reach beyond her discipline, combined efforts with McKay Jenkins, Cornelius Tilghman Professor of English, and his Environmental Journalism (ENGL409) course. Through an Interdisciplinary Humanities Research Center (IHRC) grant, a STEM course connects to a humanities course with the goal of providing students interdisciplinary experiential learning in the classroom. The professors brought the two groups of students together at various points throughout the fall semester, including for the elm planting.

“We took the elm research project and connected it to interdisciplinary, undergraduate courses,” said Trammell. “The journalism students were exposed to forestry research. It was hands-on — assisting in planting the trees and taking measurements. So you have plant science majors, environmental science majors, wildlife ecology and conservation majors working alongside humanities students.”