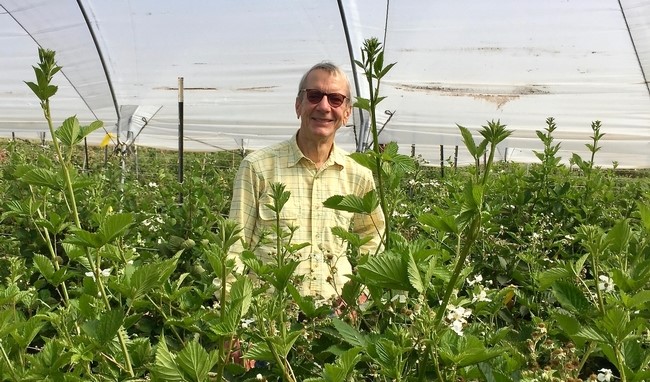 Mark Gaskell shown among blackberries bushes, but the UC Cooperative Extension advisor is known for his pioneering work on blueberries and coffee in California. (Courtesy Photo)

SAN LUIS OBISPO, Calif. — Mark Gaskell is best known these days for cultivating the idea of California-grown coffee that launched the emerging industry. But coffee isn’t the first crop that Gaskell convinced California farmers could be locally grown. For more than 23 years, the UC Cooperative Extension advisor has been researching new specialty crops, such as blueberries, blackberries, raspberries, kiwi berries, Pakistani mulberries, sweet onions, lychees and longans, for small farms to grow for a profit.

Gaskell, who began his career with the University of California’s Division of Agriculture and Natural Resources as an advisor for small farms and specialty crops in San Luis Obispo and Santa Barbara counties in 1995, retired July 1.

Blueberries weren’t grown in California until Gaskell planted test plots of southern highbush blueberries in 1996 to give small-scale growers a new crop option. He hosted his first blueberry field day in 1998. In collaboration with UC Cooperative Extension advisors in other counties, Gaskell identified varieties suited to the local climate and developed cultural practices for California growers to successfully produce blueberries. What was once a niche crop is now planted on over 7,000 acres in the state, according to the California Blueberry Commission. California currently leads U.S. production of fresh blueberries, Gaskell said.

“If it wasn’t for Mark Gaskell, I wouldn’t have lasted three years,” said Tony Chavez, who grows 40 acres of blueberries, blackberries and some raspberries in Nipomo.

Chavez had grown bored after selling La Tapatia Norcal, a tortilla shop that he operated for 34 years, and retiring in San Luis Obispo County.

“After I retired, I started a little farm. I started with blackberries,” Chavez said. “I have friends who farm. I didn’t realize it would be such hard work.”

Someone told Chavez that Gaskell helps small farmers. “He’s been my teacher about how to grow berries. Everything I know about farming, I owe to Mark,” said Chavez, who has been working with Gaskell for about 10 years. “I don’t know what I’m going to do after he retires. He’s a wonderful person and very, very knowledgeable.”

Recently Gaskell’s knowledge of coffee production has been in demand.

“Personally, I would not be where I am today professionally without Mark’s guidance, support and friendship,” said Jay Ruskey, CEO and co-founder of Good Land Organics.

“I met Mark in 1996 through the California Rare Fruit Growers,” Ruskey said. “We started work with lychee and longans and we worked for several years on bringing in plant material and planting trials. He brought me my first coffee plants in 2002.”

The exotic fruit didn’t work out for the Goleta grower, but with Gaskell’s research-based advice Ruskey has produced premium coffee. His Caturra coffee made Coffee Review’s Top 30 coffees in 2014 and in 2017 Daily Coffee News reported that Blue Bottle was selling the California-grown coffee for $18 per ounce.

Prior to joining UC, Gaskell had worked for several years in Central America in coffee growing areas.

“I became curious about coffee in 2000 after I had seen some plants growing at botanical gardens in SoCal, but I assumed the hand labor and processing requirements would prevent profitable growing here,” Gaskell recalled. “About that time, I had the opportunity to visit the coffee production area in Kona on a totally unrelated project – we were doing research with lychees and longans and that is how I began to work with Jay. But visiting coffee farms and the coffee cooperative in Kona made me rethink coffee in SoCal because of similarities to coastal sites around Santa Barbara – Jay’s farm – and the fact that costs of water, land and labor were high in Kona and yet they were making a business out of coffee.”

California is now in the coffee business with 15 varieties of Arabica coffee that Gaskell’s research has shown are growing well with acceptable yields and high quality.

“Currently, there are about 30 farms with maybe 30,000 coffee plants between San Luis Obispo and San Diego counties,” Gaskell said. “I would expect that to double this year and again next year.”

“Industry-wide, there are many farmers who have benefited directly from working with Mark, but there are far more farmers who are currently benefiting today from the specific crops and farming systems he has introduced through his service as a University of California farm advisor,”Ruskey said. “Mark’s retirement will certainly leave a resource void for farmers who are looking for allies to help them navigate the complex and dynamic world of farming.”

Gaskell began his career as an agronomy instructor for four years at Iowa State University, after earning his B.S. in agronomy and his M.S. and Ph.D. in crop physiology and production at Iowa’s land-grant college. He became an assistant professor of agronomy from 1980 to 1987 at Rutgers University, where he began working with small farmers in Panama. For two years, he conducted agricultural research in Central America for the U.S. Agency for International Development and became fluent in Spanish. From 1989 to 1992, Gaskell was director of agricultural technical services, overseeing crop production in Latin America and Central America for Chestnut Hill Farms in Miami, before returning to USAID to develop new crops for farmers in Central America.

As a Fulbright Senior Scholar, 2011 to 2014, Gaskell worked with the Moroccan National Agronomic Research Institute training growers and establishing a national research program to develop blueberries, blackberries and raspberries as alternative crops.

Gaskell’s achievements were recognized by USDA-National Institute for Food and Agriculture with the 2010 National Extension Excellence Program Award for the UC Small Farm Program Team. In 2007, he was named “Outstanding Educator” by UC Agriculture and Natural Resources.

“My work in California – beyond horticulture and agronomy – has been one of relationships,” Gaskell said. “I have worked with dozens of farmers in San Luis Obispo and Santa Barbara counties, in many cases, for more than 20 years. These farmers have often been collaborators for on-farm trials or educational events, or I have assisted them with farming and marketing, problem-solving with diverse crops and settings. These have been very rich, enjoyable and fulfilling relationships that I will truly miss.”

Make your 4th of July bash a hit with beef