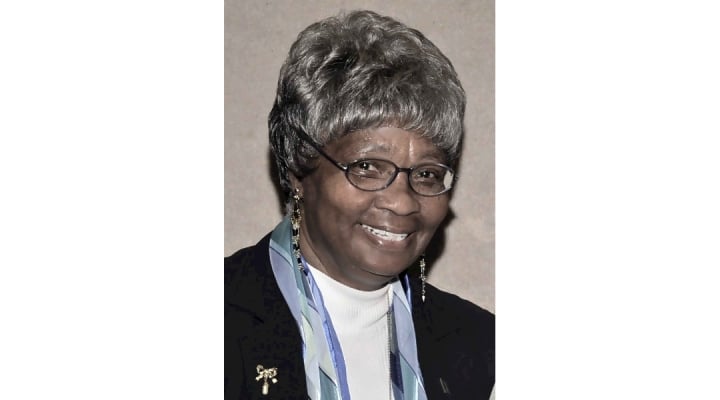 “Your dedication to NEAFCS has been exhibited through the educational resources and leadership you have provided to your community, state and across the nation throughout the years to help families improve their living conditions,” Roxie Price, NEAFCS president, wrote to the UC Cooperative Extension advisor.

Blackburn, who has served in Alameda County since 1990, credits her successful career to heroes and sheroes – the people who encouraged her along the way.

“Mary Blackburn has really made a difference in the lives of Bay Area residents. Her work with local communities makes it easier for people to stay active and eat healthy food,” said Glenda Humiston, University of California vice president for agriculture and natural resources. “It’s wonderful to see her receive national recognition from her peers.”

In 1963, UC Berkeley offered Blackburn, who had just graduated from Tuskegee University, one of four coveted spots in a new Master of Public Health Nutrition – Dietetic Internship program.

The mother of four preschool children didn’t know how she would make it work. Her husband didn’t want to leave his job in Alabama, but the opportunity was too big to turn down. She had been the first in her family to go to college and her parents, encouraging her to pursue higher education, offered to care for her children until she found housing in the Bay Area. Against the backdrop of the Civil Rights Movement, white people were holding the plane to California for her. The young Black woman felt compelled to seize the opportunity as she boarded the plane.

“I felt it confirmed that whatever I was doing, it was not at all about me, it was much bigger than me…That has kept me going for many, many years,” said Dr. B, as she is affectionately called by her colleagues.

Blackburn completed her Master of Public Health degree in 1965 and was among the first dietitians in the U.S. to become a Registered Dietitian in 1968. She continued her studies at UC Berkeley – bringing her kids with her to class when daycare fell through – to earn a doctorate in human nutrition and health planning and administration in 1974.

Getting her career off the ground as a community health professional was not easy, even in the liberal Bay Area, where she was fired for being Black. Twice. Each time she viewed the experience as progress: more than 50 years before the Black Lives Matter Movement, “There were people who were ready to stand up for me, and stand-down with me in the late Sixties,” she said.

Blackburn is nationally renowned for her pioneering work delivering research-based nutrition and quality of life education to senior citizens, pregnant teens and other vulnerable groups. Collaborating with the UC CalFresh Healthy Living program staff and UC Master Gardener volunteers, she recently launched a gardening project designed to improve the nutrition, physical activity and overall well-being of senior citizens living in affordable housing in Oakland, with special consideration for seniors with physical limitations.

A trailblazer in community nutrition and health planning, Blackburn began connecting gardening to nutrition in the early 1990s, long before community gardens became the preferred way to improve public health – a throwback to the World War II Victory Gardens.

In the 1960s, she was a public health nutritionist on a preventative primary-care team, working alongside doctors, public health nurses, social workers, psychologists, psychiatrists, occupational therapists, and community health workers to provide families with preventive health care after a child visited an urgent care clinic. The team took a holistic approach to addressing the social drivers of health – food, affordable housing and access to health care.

Her research, dating back to 1973, was seminal in addressing the social and health needs of different communities across the Bay Area – making dietary recommendations for Black people at risk for chronic disease, multi-ethnic people, pregnant women, young children and adolescents. Armed with her research, and assessments and evaluations of other members, the team urged policymakers to increase the food allotment for families with small children suffering from chronic food insecurity.

Due to the coronavirus pandemic, the National Extension Association of Family and Consumer Sciences recognized Blackburn with the Hall of Fame Award on Sept. 14 during a virtual conference. Blackburn has won numerous local, state, regional and national awards over the years, including the NEAFCS National Excellence through Research five times.

UC Agriculture and Natural Resources brings the power of UC to all 58 California counties. Through research and Cooperative Extension in agriculture, natural resources, nutrition, economic and youth development, our mission is to improve the lives of all Californians. Learn more at ucanr.edu.

Housing for the Harvest program expands