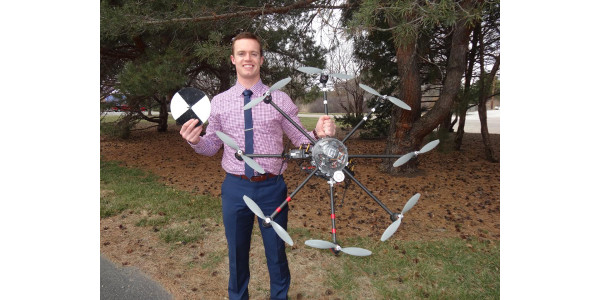 LINCOLN — When Galen Kreifels was in the Army, he operated an unmanned aerial system called the Raven, which plays a major role in observing combat zones. The freshman mechanized systems management major is now using that experience to advance his undergraduate research project using an unmanned aircraft system (UAS) to measure water quality.

Kreifels was awarded an Undergraduate Creative Activities and Research Experience, or UCARE grant to develop and document a lightweight and rapidly deployable UAS to aid in the collection of lake turbidity data.

“Participating in the Raven Operators Course in the Army was really what got me interested in unmanned aircraft. I supported the reconnaissance platoon while operating the Raven, and now through my research I want to support the U.S. Geological Survey, Nebraska Game and Parks Commission and others gathering water quality readings. There is a growing need for fine-scale responsive data in water resource management and I feel this could help.”

For the project, Kreifels attaches a circular disk called a secchi disc to a UAS that can navigate to specific locations over bodies of water. The Secchi disk is then lowered into the water to measure the turbidity, or clarity, of the water. Currently, these readings are taken by individuals who have to use a boat to reach specific locations on the water, and then lower the secchi disc using a rope.

“This device could help gather readings in hard to reach locations,” explained Kreifels. While he configures the UAS, Kreifels is currently taking readings from stock tanks filled with water of variable turbidity. As the research advances, he plans to test the system in lakes, streams and reservoirs.

A native of Nebraska City, Kreifels joined the Army when he was 18 and served for three and a half years as a Cavalry Scout, a role that involved securing and preparing ammunition on scout vehicles, navigation during combat, reporting information and collecting data to classify routes. In 2013, Kreifels joined the Nebraska Army National Guard and was accepted into the Warrant Officer Flight Training Program, and currently serves as a UH-60 Blackhawk helicopter pilot, while attending the University of Nebraska–Lincoln full time.

“I’m busy but it’s worth it when you get to work on projects that you’re passionate about,” Kreifels said. He holds FAA certifications as a commercial helicopter pilot, instrument helicopter pilot and remote pilot.

Each year, 50 to 60 undergraduate students from the College of Agricultural Sciences and Natrual Resources participate in UCARE, which gives them an opportunity to work in research one-on-one with a faculty research adviser. Kreifels research adviser is Wayne Woldt, environmental engineer and associate professor of biological systems engineering. Woldt also manages the Nebraska Unmanned Aircraft Innovation Research and Education (NU-AIRE) Laboratory.

“Galen’s project is focused on water quality, one of Nebraska’s top ten water challenges,” said Woldt. “We’re thrilled to have his insight and experience in the NU-AIRE Lab conducting research on an issue critical to our state.”

To learn about other UCARE projects currently underway in CASNR, visit http://ianr.unl.edu/growing/students-grow-through-research.