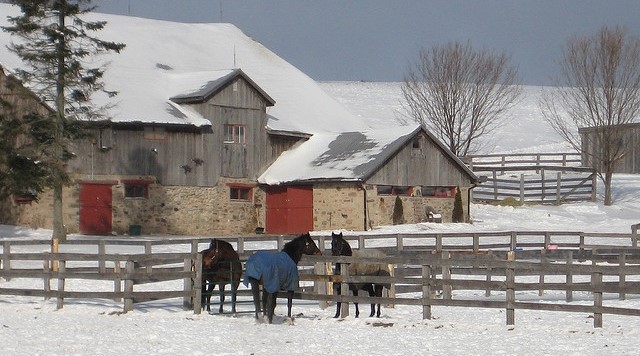 With Christmas in just a few days, many will be dreaming of a white Christmas, but who has the greatest chance of seeing one? (Kaarina Dillabough, Flickr/Creative Commons)

The winter solstice occurred Thursday at approximately 11:28 a.m. EST. The first day of astronomical winter was met with varying temperatures trends across the U.S. In the Northeast, the West and the far North Central, forecasts for today call for colder than normal temperatures while much of the Central and Southeastern U.S. trend at least 5-10F above normal.

With Christmas in just a few days, many will be dreaming of a white Christmas, but who has the greatest chance of seeing one? Current U.S. snow cover shows snow on the ground for 28.3 percent of the country including much of the northern states and in New England. Some warmer than normal temperatures to end the week, accompanied by some rain showers could eliminate some of this snow cover in the East, however.

Over the next several days, the North Central, Rocky Mountains, Great Lakes and New England have the greatest chance for snowfall. Colder than normal temperatures are forecast to move back into the Central U.S. by Christmas Eve, and spread to the East Coast by Christmas Day. Many from Idaho to Maine and south to include parts of Pennsylvania to Illinois have the greatest probability of having a white Christmas this year. 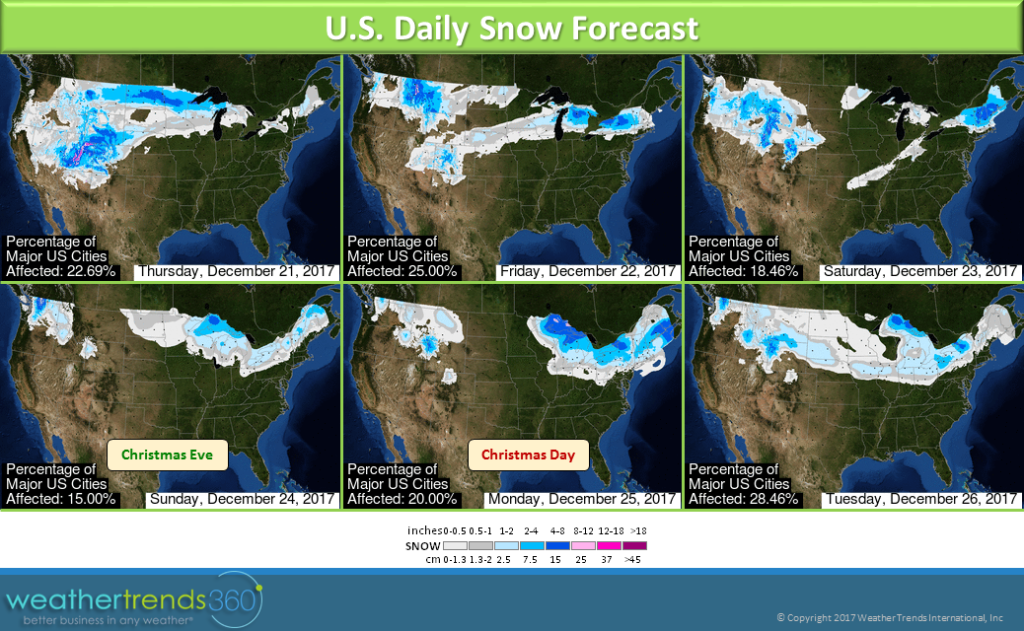 Following Christmas, colder than normal temperatures will stick around, especially in the North Central and Northeastern U.S. Forecasts currently show a very cold end to the month for much of the Central U.S., with many forecast to see temperatures more than 15F below normal by New Year’s Eve. Central and Eastern states will likely see a very cold and winter-like start to the New Year.

As we look ahead to January, Weather Trends’ long-range snowfall outlook is calling for a much snowier January than last year for many from Maine to Kansas, while the North Central receives similar amounts of snow to last year and the West receives generally less snow than last year. For the U.S. as a whole, snowfall is forecast to be slightly above average for the month and the snowiest January since 2014.

Stormy weather early in the month across the Plains will bring a mixture of wintry weather and snow to the north and west of the storm (from the Texas Panhandle northward through the Plains) and ice or rain further east. Later in the month, a series of Alberta Clippers could head southeast through the North Central states and then head to the Northeast. 1 or 2 of these systems may become a Nor’easter and bring heavier snow to interior New England. The storm track shifts back to the Midwest late in January with more significant snow possible. The West will be much drier with much less snowfall in most places.

Regardless of whether or not you have a white Christmas this year, Weather Trends wishes you a safe and happy holiday season!