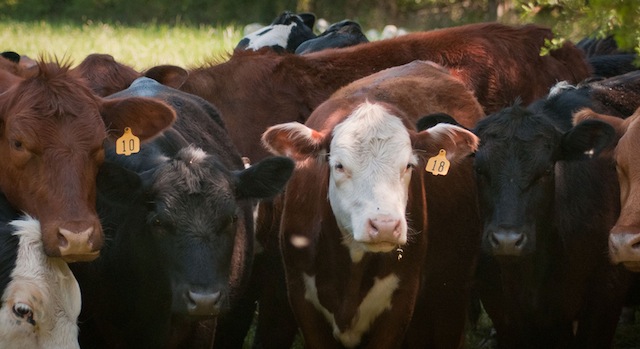 "The beef herd expansion we've seen from 2014 to 2017 has been the most aggressive three-year start to any expansion on record," said Trevor Amen, animal protein economist at CoBank. (U.S. Department of Agriculture, Flickr/Creative Commons)

DENVER — As the U.S. beef cattle herd expands over the next two years, beef production is projected to keep pace and increase another three to five percent in 2018 and 2019, according to a new report from CoBank’s Knowledge Exchange Division. Strong profitability and years of excellent pasture conditions provided the strong footing that has spurred the expansion.

“The beef herd expansion we’ve seen from 2014 to 2017 has been the most aggressive three-year start to any expansion on record,” said Trevor Amen, animal protein economist at CoBank. “Recent slaughter numbers and the cattle on feed mix indicate the expansion rate is slowing, but barring any significant export market disruptions or weather events, expansion will continue through the end of the decade.”

“Profitability for cow-calf producers was at record levels in 2014 and 2015,” said Amen. “Historically, average profitability at the cow-calf level has to dip below breakeven to trigger a transition from herd expansion to contraction.”

Demand Will Remain a Critical Factor

Beef demand has exceeded expectations so far in 2017. A price rally and favorable margins for feeders and packers have bolstered overall industry profitability. Strong beef exports are critical to keep supplies in check and support prices. Exports are currently on pace to increase seven to nine percent in 2017 and five to seven percent in 2018.

“Export demand has been strong,” said Amen. “Momentum has been building since July 2016 and forecasts continue to adjust upward for the remainder of this year. Combined with decreased imports, we’re experiencing a more favorable net trade balance and keeping domestic per capita supplies in check while supporting prices levels.”

Amen suggests the industry will be squarely focused on maintaining export growth and strong domestic consumption in the face of growing supplies. Increasing dependence on export markets offers significant growth opportunities for the industry, but also increases the uncertainty and risk of domestic oversupply.

Packing Capacity Not a Concern

While the number of market-ready cattle will continue to increase over the next two years, currently available slaughter capacity at U.S packing plants will be sufficient to handle the increase. Saturday slaughter hours have been steadily increasing since the middle of 2016. However, it is unlikely that packers will need to reopen shuttered plants or build additional facilities.

Processors are expected to increase investments in automation and robotics to reduce the risk of skilled labor shortages. Ongoing modernization of plants for greater efficiency and productivity will simultaneously equip the industry to meet the most advanced food safety protocols, an imperative to keep the U.S competitive in the global beef market.

A brief synopsis of the report, “U.S. Packing Capacity Sufficient for Expanding Cattle Herd” is available on the CoBank YouTube channel. The full report is available to media on request.

CoBank is a $125 billion cooperative bank serving vital industries across rural America. The bank provides loans, leases, export financing and other financial services to agribusinesses and rural power, water and communications providers in all 50 states. The bank also provides wholesale loans and other financial services to affiliated Farm Credit associations serving more than 70,000 farmers, ranchers and other rural borrowers in 23 states around the country.

Agriculture Marketing and Promotions Advisory Board to Hold Virtual Meeting June 3
May 26, 2022