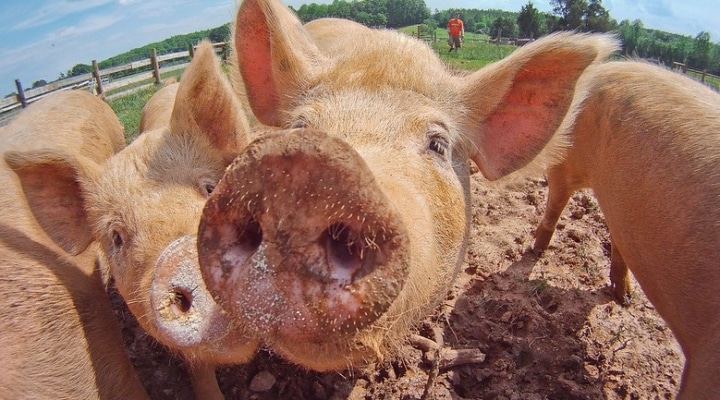 COVID-19 has created problems for all meat producers, but pork farmers have been hit especially hard. (USDA Photos by Lance Cheung)

Instead, restaurant closures due to the coronavirus have contributed to an estimated $5 billion in losses for the industry, and almost overnight millions of hogs stacking up on farms now have little value. Some farmers have resorted to killing piglets because plunging sales mean there is no room to hold additional animals in increasingly cramped conditions.

“One producer described it to me the other day as a snowball rolling downhill, and every additional disruption that we have just kind of adds to that and how fast and how big it’s going to be when it finally hits,” said Mike Paustian, who farms 2,400 acres (971 hectares) of corn and soybeans and sells 28,000 pigs a year near the small eastern Iowa community of Walcott.

COVID-19, the disease caused by the coronavirus, has created problems for all meat producers, but pork farmers have been hit especially hard.

They entered this spring in shaky financial condition because tariffs had drastically reduced sales to China and Mexico. Many operations have struggled to get enough workers, in part due to federal immigration policies. Then demand plunged because the virus forced the closure of restaurants, hotels and other businesses that buy about 25% of pork, including nearly three-quarters of bacon produced in the U.S.

The biggest problem could be getting worse as additional giant slaughterhouses that can process more than 20,000 hogs a day have had to close at least temporarily as the virus spreads among workers. The industry slaughters from 10 million to 12 million pigs a month.

Whereas poultry producers can slow production by not hatching baby chicks and ranchers can keep cattle on pastures longer, pork farmers don’t have good options. Hogs are raised inside barns with limited space, and it takes time to stop the birthing cycle for pigs.

“We are in crisis and need immediate government intervention to sustain a farm sector essential to the nation’s food supply,” said Howard Roth, a pig farmer from Wauzeka, Wisconsin, and president of the National Pork Producers Council, an industry trade group.

The group has asked the federal government to buy $1 billion worth of pork in cold storage that had been destined for restaurants and instead give it to food banks, which have been besieged by people who have lost their jobs as much of the economy has shut down.

On Friday, the U.S. Department of Agriculture announced it would spend $3 billion to buy fresh produce, dairy and meat that will be sent to food banks. Roth said the purchase will hopefully help move a backed up supply of pork and help raise hog prices. The USDA also said it planned $1.6 billion in direct payments to pork farmers with limits of $250,000 per individual.

Roth said the aid was appreciated but wasn’t enough to meet their problems.

Farmers have also received emergency waivers from the government to increase the number of pigs they can keep in barns beyond normally allowed limits. Still, farmers without extra space are faced with the prospect of killing baby pigs they can’t afford to feed.

“Sadly it’s true that euthanizing is a question that’s going to come up on farms,” Roth said.

Paustian, the eastern Iowa farmer, said the most frustrating part has been the uncertainty of scheduling deliveries of hogs to meat producers that fall through. Even as the majority of slaughterhouses have continued to operate, most plants are large and their closure is a severe hardship for hog farmers who operate in the region, he said.

Because a plant has closed about 40 miles (64 kilometers) away in Columbus Junction, Iowa, Paustian said farmers in his area are sending hogs to other plants in the state and Indiana.

“Producers are on pins and needles every day right now, and nobody knows if they’re going to get loads out. They get loads scheduled then they get canceled. It’s kind of a roller coaster of emotion for producers right now,” Paustian said.

Producers he knows have been able to sell about half of the pigs they’d normally send to market. It’s enough to get by for a few weeks, but it’s not sustainable, Paustian said.

For many pork producers, the coronavirus pandemic may be the final straw, said Nick Giordano, a vice president at the National Pork Producers Council.

“We are hearing from lots of producers. They’re hanging on for dear life,” Giordano said.

Besides seeking the purchases for food banks and direct payments to producers, the group wants to make agricultural businesses eligible for a federal economic injury disaster loan program.

While not denying the industry’s problems, some people who raise pigs independently say the coronavirus has revealed that the industry is too reliant on a few large international corporations that oversee everything — from raising hogs to processing plants and even marketing and sales.

Chris Petersen, a northern Iowa farmer, raises Berkshire pigs “the old fashioned way” — in individual A-frame houses instead of large confinement buildings. He laments the loss of the independent farmers who marketed pigs to nearby buying stations that delivered the animals to smaller packing plants much closer to the farms.

“It’s a very fragile system because everything has to work just right,” Petersen said.

U.S. soy is ready to deliver