Corn harvest progress in the United States, while still ahead of the 5-year average, has slowed down a bit. (United Soybean Board via Flickr)

WASHINGTON — Corn harvest progress in the United States, while still ahead of the 5-year average, has slowed down a bit. October has certainly provided its fair share of weather woes to the Corn Belt thus far. Heavy rains, temperatures well below normal, as well as frosts, freezes, and even snow have impacted areas of the Corn Belt. Of the 18-main corn producing states, 6 currently trail their 5-year average harvest pace: Pennsylvania, Iowa, South Dakota, Minnesota, North Dakota, and Kansas.

Looking at the weather trends during the first half of the month, it is unsurprising that these states are a bit behind pace. Let’s take a closer look at Iowa, whose harvest is currently 17% complete, down -7 points from average, yet up +5 points from last year. Total precipitation during the front half of October has trended significantly above normal and the 2nd wettest in over 27 years. If these trends are giving you a bit of déjà vu, don’t fret – these precipitation trends nearly mimic that of last year, when precipitation during early October trended well above normal and the #1 wettest in 27+ years. Unlike last year when the second half of the month took a turn for the drier, conditions this year are expected to continue to trend a bit wetter than normal.

Harvest progress in South Dakota is also currently 17% complete, although only about -4% behind average and +6% ahead of last year. Total precipitation during the first half of October has trended above normal, slightly less than last year, and the 8th wettest in 27+ years. Snowfall has also trended above normal so far this month, with most of the state receiving some accumulating snowfall already. Temperatures in the state have been downright cold, trending on average almost 11F below normal and the 2nd coldest in 27+ years for the state. While temperatures will trend a bit closer to normal during the second half of the month, precipitation is expected to remain slightly above normal. 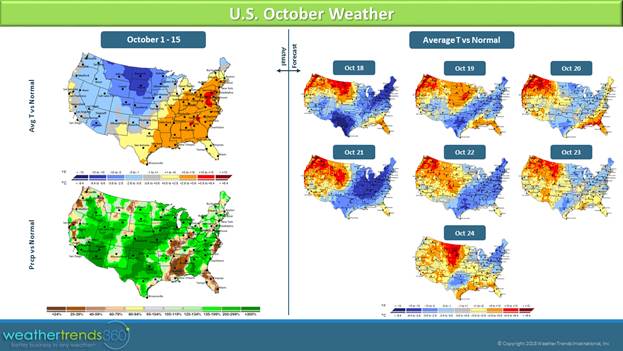 To help make up for states like Iowa and South Dakota, there are several states progressing ahead of schedule this year as well. Illinois (+17%), Indiana (+12%) and Missouri (+14%) are trending the furthest ahead of their respective averages so far this season. Not only did reaching maturity faster-than-normal aid in an earlier and thus quicker than normal harvest, but the weather has been a bit more cooperative as well. Temperature trends were generally warmer than normal during the first half of October, although precipitation trends were a bit more mixed. In general, these states have also trended wetter than normal, but not quite as wet as those to their north and west. The rain was in fact welcomed across Missouri as varying levels of drought had plagued a good portion of the state since June. The latter half of October, however, will bring a wholesale change, at least when it comes to temperatures. Through the end of the month, temperatures will trend below normal, finally making it feel more like fall. In fact, just this morning (Thursday, 10/18) there were widespread Freeze Warnings and Frost Advisories across the eastern Corn Belt and into the Northeast.

Over the next 7 days, much of the Corn Belt will benefit from minimal precipitation. If you live in the South Central, however, it’s time to break out the umbrellas as rainfall is forecast to trend well above normal. Temperatures will be largely mixed through mid-week next week though. The Upper Plains and Northwest will be much warmer than normal for most of the 7-day forecast period, while areas from the South Central to the Northeast will trend cooler to much cooler than normal. Several days could in fact bring temperatures at least 5-10F below normal.