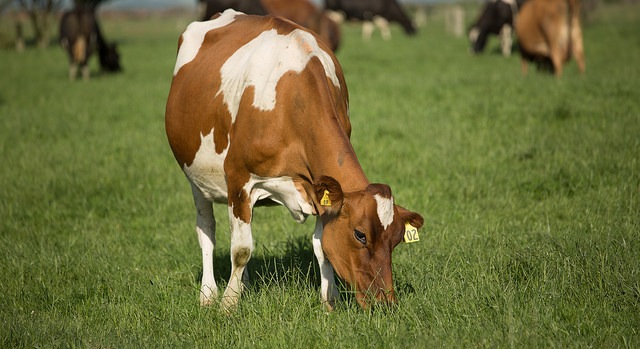 According to the analysis, total economic contributions (direct, indirect and induced) created by dairy sales to Mexico show the true importance of these exports to the overall U.S. economy. (Farm Watch, Flickr/Creative Commons)

ARLINGTON, Va. — The current free trade agreement with Mexico is the driving force behind $1.2 billion in U.S. dairy exports to our southern neighbor, as well as billions more in economic contributions, according to an analysis released today by Informa Economics.

Mexico is the No. 1 market for U.S. dairy product exports, accounting for roughly one-fourth of total U.S. exports. In 2016, the most recent year examined by Informa, the United States shipped $1.2 billion worth of dairy products to Mexico, up from $201 million in 2002. In 2016, Mexico accounted for 45 percent of total U.S. skim milk powder exports to all destinations, as well as 30 percent of cheese exports, 10 percent of butter exports and 8 percent of whey exports.

According to the analysis, total economic contributions (direct, indirect and induced) created by dairy sales to Mexico show the true importance of these exports to the overall U.S. economy. Including impacts to industries that are linked to U.S. dairy exports to Mexico, the aggregate 2012-2016 output value of $6.7 billion is magnified to $23.3 billion in economic output.

Informa’s analysis found that for every $1 of sales associated with dairy exports to Mexico, an additional $2.50 in output (industry sales) is supported elsewhere in the U.S. economy. U.S. dairy exports to Mexico also created 16,492 full-time equivalent jobs while directly generating an aggregate GDP of $8.4 billion over that five-year period.

“This analysis not only illustrates the importance of preserving existing market access to Mexico under North American Free Trade Agreement (NAFTA), but also demonstrates why we are urgently pursuing new opportunities via U.S. free trade agreements around the globe,” said U.S. Dairy Export Council (USDEC) President and CEO Tom Vilsack. “Virtually every U.S. free trade agreement to date has yielded positive results for dairy, and current negotiations hold great potential for the industry.”

The authors of the analysis note that under NAFTA, U.S. exports of dairy products to Mexico are duty free. This provides a significant advantage to the United States because export competitors shipping to Mexico are subject to MFN tariff rates of 20-45 percent on cheese, 45 percent on skim milk powder and 10 percent on whey products.

“Without NAFTA, the United States would be paying higher tariffs in terms of MFN tariff rates of 20 to 45 percent, or the same levels as its competitors,” the authors wrote.

Some competitors, including the European Union (EU), are already negotiating trade agreements with Mexico that could make their exports more competitive in the Mexican market.

“As this analysis shows, the relationship between the U.S. and Mexican dairy sectors is of great importance, not just to our producers, but to our economy as a whole,” said Jim Mulhern, president and CEO of the National Milk Producers Federation (NMPF). “We are committed to working toward a modernized NAFTA agreement that preserves this open and dependable trade relationship with Mexico, while removing massive barriers to dairy trade with Canada that were not adequately addressed in the original agreement.”

The analysis notes that while transportation advantages will continue with or without NAFTA, these logistical advantages would, at best, only partially offset economic losses in terms of business sales, GDP and jobs.

The study also reviews the potential increase in competition through the renegotiation of the EU-Mexico free trade agreement and the implementation of the newly established Comprehensive and Progressive Agreement for Trans-Pacific Partnership (TPP-11) negotiations. Both negotiations could improve market access for competitor dairy product exports to Mexico.