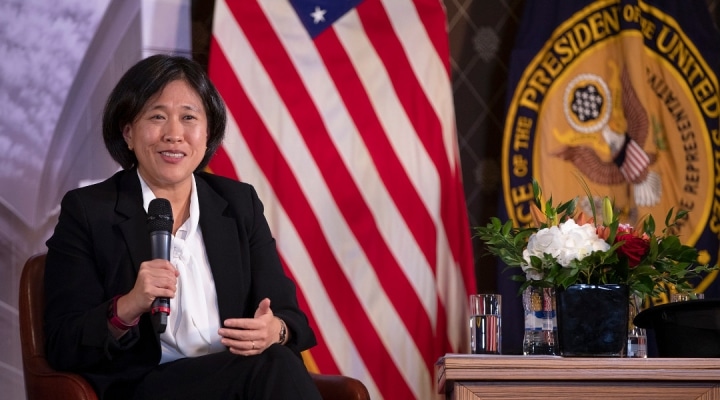 WASHINGTON — The United States and Japan have agreed on an increased trigger level for the implementation by Tokyo of safeguard restrictions on U.S. beef imports under a bilateral trade deal, the Office of the U.S. Trade Representative said Thursday.

The new trigger level would make it difficult for Japan to impose an emergency tariff hike on beef imports to protect its domestic market, long a sore point for U.S. meat exporters who have been seeking greater access.

“The new three-trigger safeguard mechanism will allow U.S. exporters to meet Japan’s growing demand for high-quality beef and reduce the probability that Japan will impose higher tariffs in the future,” the USTR said in a statement.

Under the U.S.-Japan Trade Agreement, higher tariffs can be imposed if imports of U.S. beef top a set quota or exceed the total amount in the previous year.

Following the latest agreement, the aggregate volume of beef imports from the United States and the original members of the Pacific free trade pact known as the Comprehensive and Progressive Agreement for Trans-Pacific Partnership must now exceed the framework’s safeguard level.

Farmers in the United States, which withdrew from the original framework for the CPTPP in 2017, have felt disadvantaged compared with their counterparts in the member countries of the pact such as Australia, a key source of beef imports for Japan.

The CPTPP, which includes Japan and entered into force in 2018, lowered trade barriers for goods and services among its members.

In the statement, U.S. Trade Representative Katherine Tai called the new safeguard agreement a “great win” for the two countries.

In March last year, Japan imposed an emergency tariff hike of 38.5 percent from 25.8 percent on U.S. beef imports for 30 days as the volume of U.S. beef imports in fiscal 2020 had exceeded the quota set under the bilateral trade agreement.

That move was criticized by the U.S. Meat Export Federation that said based on its 15-year outlook, the beef safeguard at the time would likely be triggered annually unless the two countries raised the threshold.

The text of the agreement still needs to be finalized according to the USTR statement but a specific timeline was not given.