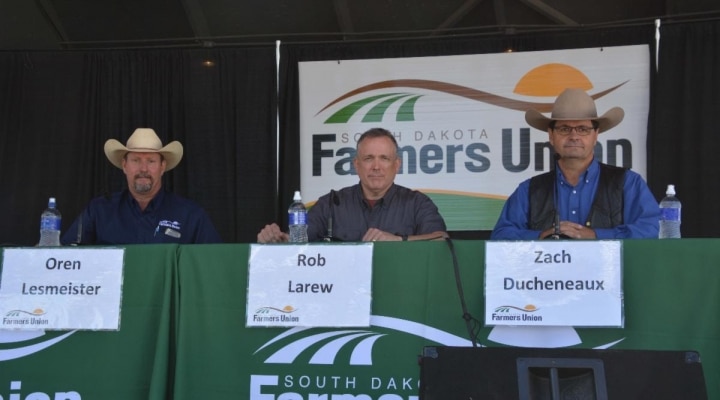 “In light of what happened to our pork and cattle markets and overall food supply during the pandemic, the current Administration issued an Executive Order making food security a top priority of the USDA. This is good news for family farmers, ranchers and the consumers we serve,” said Doug Sombke, President of South Dakota Farmers Union.

“Zach is a South Dakota rancher, so he is no stranger to the producer’s role in food security,” Sombke said.

“Food security is not just a rural thing,” explains Lesmeister.

“Everyone is concerned about the food supply, and they want to know where their food comes from,” Montross says.

To this point, Larew said, “We have a marketplace dominated by just a handful of folks – just four packers have 85 percent control of cattle market. That is not just bad news for cattle producers, but also consumers. When so much power is concentrated, and there is a disruption like the pandemic, consumers’ experience price gouging in grocery stores and farmers suffer huge profit losses. For the sake of our food supply, we need fair markets.”

Ducheneaux shared how the USDA Farm Service Agency works to protect food security by helping producers following disasters. “It is important that we provide the income stream they need to help them weather market disruptors,” Ducheneaux explains. “The Secretary of Agriculture often shares a statistic that 89 percent of producers make a majority of their income off the farm. No wonder the average age of farmers is creeping toward 65.”

Ducheneaux also says that if the current Farm Service Agency programs are not meeting the needs of farmers and ranchers, when they are faced with a disaster, he wants to know. “My e-mail address is Zach. Ducheneaux@usda.gov and I answer all my own e-mail. Please reach out.”

The market’s impact on food security was also evident today, during Farmers Union Farmer’s Share Lunch, where fairgoers enjoyed lunch for .25 cents. This lunch highlights the large difference between grocery store prices and what farmers and ranchers receive for the crops and livestock they raise.

To learn more about South Dakota Farmers Union and the work this grassroots organization does to support family farmers, ranchers and rural communities, visit www.sdfu.org.

Achievements on display at the South Dakota State Fair
October 19, 2021