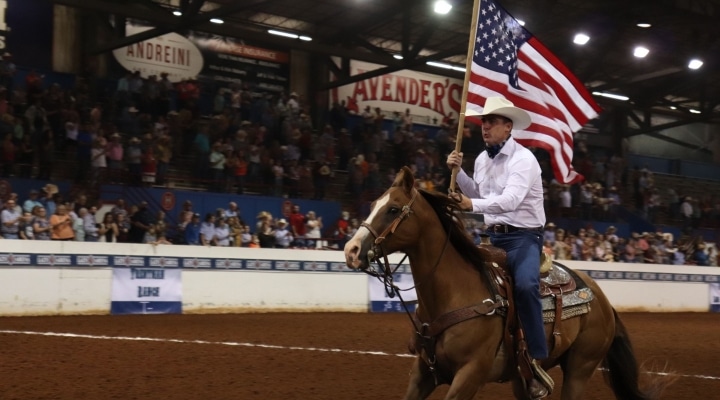 Governor Kevin Stitt's rural roots were shined Saturday night at the Lazy E Arena. Governor Stitt graciously accepted the invitation to carry the American flag during the National Anthem at the Oklahoma Cattlemen's Association Ranch Rodeo and it was only fitting that he do it horseback. (Courtesy Photo)

“It was such an honor for Governor Stitt to spend time at the OCA Ranch Rodeo and help us kick the event off the only way we know how, by paying respect to our flag,” said Weston Givens, OCA Ranch Rodeo Chairman. “As an agriculturalist, it’s certainly encouraging to know that Oklahoma has a Governor that appreciates, understands and will fight for agriculture.”

Assisting the Governor in opening ceremonies and carrying the Oklahoma flag was, Oklahoma Secretary of Agriculture, Blayne Arthur.

“Secretary Arthur is doing a great job representing the Oklahoma Agriculture and is phenomenal to work with from an Association standpoint. It was a real treat to have her join us for both nights of the OCA Ranch Rodeo,” Givens said.

The OCA Ranch Rodeo consists of twelve ranch teams of real ranch cowboys that compete in five different events mirroring many of the activities they do on the ranch. McPhail Land and Cattle from Mountain Park, Okla. was named Champion Team on Saturday night. The win qualifies them to compete at the Working Ranch Cowboy Association National Finals this fall.

“When it’s all said and done, the cowboys are not competing for much more than bruises and bragging rights.” Givens said.

The Children’s Hospital Foundation has been the selected charity since 1997. In that time OCA has donated more than $531,000 to CHF to help fund children’s medical research and treatment for children right here at home in Oklahoma.

“The camaraderie among the ranch teams, paired with our mission . . . ‘Cowboys Helping Kids’ makes participating worthwhile and enjoyable,” said Givens. “Ranchers have a built-in instinct to care for others. We care for our land and animals, and produce safe, nutritious food that nourishes people around the world. So, participating in this event to raise funds for the Children’s Hospital Foundation is not only natural for the cowboys, but it’s heartfelt.”

According to Givens, the Oklahoma Ford Dealers have supported the OCA Ranch Rodeo since the beginning as the presenting sponsor.

“We appreciate the Oklahoma Ford Dealers and their support, so that we can support our fellow Oklahomans,” Givens concluded.

The Oklahoma Cattlemen’s Association is the trusted voice of the Oklahoma Cattle Industry. OCA is the only voice that speaks solely for the cattlemen of Oklahoma and represents beef producers in all 77 counties across the state. The OCA officers, board of directors and membership encourages you to join us in our advocacy efforts to ensure less government intervention, lower taxes and a better bottom line. For more information about OCA membership, the theft reward program or activities call 405-235-4391 or visit www.okcattlemen.org.