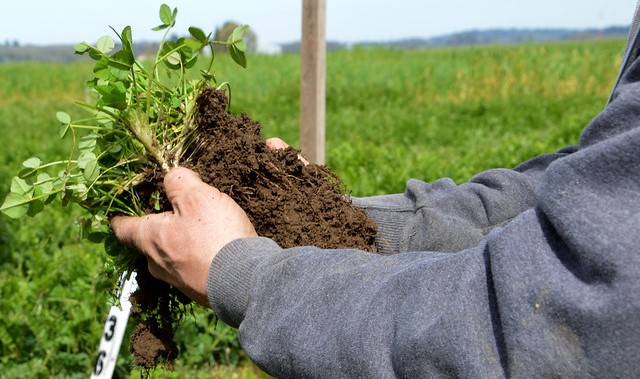 The SARE program has funded close to 1,000 research and education projects on cover crops in the 30 years since SARE was first funded by USDA, including grants awarded directly to farmers to try new ideas such as different cover crop management approaches on their land. (NRCS Oregon, Flickr/Creative Commons)

WASHINGTON — The adoption of cover crops as a key soil health practice continues at a rapid rate throughout the country, according to new data from the 2017 Census of Agriculture. Cover crops were planted on 15.4 million acres in 2017, an increase of 50% over five years, the census shows. Iowa led the way with a 156.3% increase during that period, and a number of other states also more than doubled their cover crop acreage, including Missouri, Illinois, Ohio, Mississippi, Nebraska, Vermont and Arizona.

“In visiting with my fellow farmers all over the United States, it’s been incredibly gratifying to see so many people committed to the stewardship of our soils,” says Steve Groff, a Pennsylvania farmer and one of a growing number of enthusiastic cover crop experts. “In too many places our soils have become degraded, and we really need to reverse that trend and rebuild the health of our soils going forward. Cover crops are one of the most effective tools we have to restore soil carbon and regenerate our soils.”

The remarkable expansion of cover crop acreage is a result of countless efforts by conservation advocates and others across the country. “This significant growth in cover crop acreage is providing major dividends in soil health and conservation on many types of farms and in all regions of the United States,” says Dr. Rob Myers, director of Extension programs for North Central Region SARE. “My hope is that this pace of increase will continue and even accelerate, leading us to 40 or 50 million acres of cover crops in the next decade.”

“Getting significant additional growth in cover crop adoption will take continued interest by farmers and a coordinated effort among many different partner organizations and agencies, which I believe we can accomplish,” Myers says. “The need for additional protection and improvement of our nation’s soils is paramount, as our whole food system depends on having healthy soils.”

According to Myers, a number of factors have contributed to this growth in cover crop acreage:

The SARE program has funded close to 1,000 research and education projects on cover crops in the 30 years since SARE was first funded by USDA, including grants awarded directly to farmers to try new ideas such as different cover crop management approaches on their land. Program staff and grantees have also developed a wealth of educational materials on cover crops, much of which can be found at www.sare.org/covercrops.