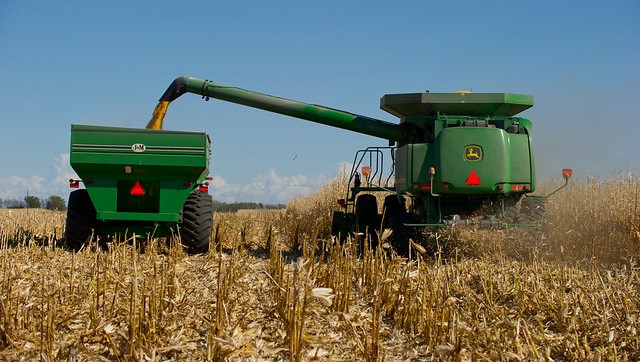 As of August 4th, 57 percent of this year’s corn crop was reported in good or excellent condition, 14 percentage points below the same time last year. (United Soybean Board, Flickr/Creative Commons)

Area for soybean harvest is forecast at 75.9 million acres with planted area for the nation estimated at 76.7 million acres, down 4 percent from the June estimate, and down 14 percent from last year. Soybean yields are expected to average 48.5 bushels per acre, down 3.1 bushels from last year. If realized, the forecasted yield will be a record high in Arkansas, Kentucky, and Tennessee.

Average corn yield is forecast at 169.5 bushels per acre, down 6.9 bushels from last year. NASS forecasts record-high yields in Kentucky and Tennessee. Acres planted to corn, at 90.0 million, are down 2 percent from NASS’ June estimate but up 2 percent from 2018. As of August 4, 57 percent of this year’s corn crop was reported in good or excellent condition, 14 percentage points below the same time last year.

NASS interviewed approximately 20,800 producers across the country in preparation for this report. NASS is also gearing up to conduct its September Agricultural Survey, which will focus on wheat, barley, oats and rye growers. That survey will take place during the first two weeks of September.

The Crop Production report is published monthly and is available online at www.nass.usda.gov.