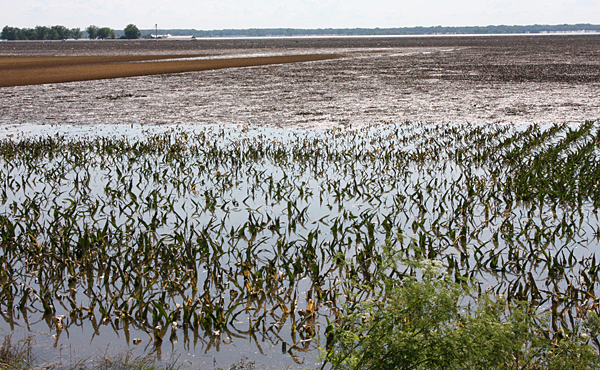 URBANA, Ill. – Market attention continues to focus on the potential size of the U.S. corn and soybean crops. Acreage totals look to remain uncertain for the rest of the year and any adjustments in the next WASDE report may not reflect the changes facing both crops this year. U.S. average yields appear set to move lower in the upcoming WASDE report as severe delays in planting indicate reduced yield potential, according to University of Illinois agricultural economist Todd Hubbs.

“Expectations for the U.S. average corn and soybean yields this year continue to deteriorate over recent weeks as planting delays dragged on over much of the Corn Belt,” Hubbs says. “In particular, states in the eastern Corn Belt dealt with extremes moisture and massive delays this year.”

Yield potential falls for corn planted after the second or third week of May, all other conditions equal, Hubbs explains.

“Even though progress accelerated last week on drier weather, corn planting after May 25 came in at a higher-than-average percentage. Based on the USDA’s weekly Crop Progress report, an estimated 51% of the corn acreage in the 18 major corn-producing states went in the ground after May 25, compared to the average of 16.8% from 1986 through 2018,” he says.

Typically, late-planted acres remain isolated in specific areas of the country. While most of the very late planting this year occurred in eastern corn-producing states, a substantial amount of late-planted acreage occurred in almost every Corn Belt state (see farmdoc daily article from May 1 for more details).

“The USDA’s weekly ratings of corn conditions due out this week in the Crop Conditions report should provide an initial indication of the 2019 crop. This conditions report is setting up to be one of the worst on record,” Hubbs says.

“Crop condition ratings usually fall as the growing season progresses. Early-season ratings do not supply an unbiased indication of the final U.S. average yield,” Hubbs says. “Even so, the upcoming rating, along with severe planting conditions, should keep yield expectations low.”

If one includes 1995 with the five years mentioned above with the worst good and excellent ratings, the U.S. average corn yield came in above trend only in 1992 (+11 bushels) and 1990 (+2 bushels). The average yield over all six years totaled 9 bushels below trend.

“While the upcoming WASDE report may not fade the corn yield very much, an expectation this year for corn yield at or below trend appears reasonable,” Hubbs adds.

Soybean planting lagged well behind average pace this year as well. As of the June 3 Crop Progress report, 39% of the crop in the 18 major soybean producing states was planted. An expectation of substantial planting progress over the next few weeks is in place. Based on the USDA’s weekly Crop Progress report, an estimated 72% of the soybean acreage in the 18 major soybean-producing states went in the ground after May 25. This amount sits well above the average from 1986 through 2018 of 39.2%.

“Field trials in Illinois indicate yield losses higher than 10% after May 20 with increasing levels as planting moves into June,” Hubbs says. “Planting after June 10 led to almost a 20% loss expectation for soybean yields. While this seems drastic, actual national data on soybean yields rarely falls outside a range of 3 bushels from trend (see farmdoc daily article from June 6 for more details).”

Uncertainty regarding acreage levels for corn will linger, but acreage reduction in the 7-12 million acres range produces a corn crop 1.7- 2.2 billion bushels smaller than currently projected by the USDA. For soybeans, an average yield of 47.8 bushels, which sits 1.7 bushels lower than the current USDA projection, fits current conditions.

“If one assumes 2 million additional soybean acres due to switching, soybean production comes in 150 million bushels less than forecast by the USDA. The June 11 WASDE report should provide the first indication from USDA about the size of both crops this year. The June 28 Acreage report will be the next major indicator,” Hubbs concludes.

Controlling mosquitoes on your property