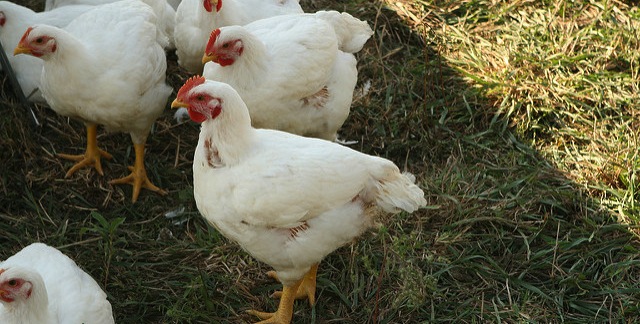 When prompted, 69% of consumers were extremely or very concerned about food safety, and 57% about hormone / steroid use, and 55% about antibiotic use.  Although still low, concern is growing about the time it takes to raise a chicken – 26% were extremely or very concerned this year while 19% were last year. (Geoffrey McKim, Flickr/Creative Commons)

ASHEVILLE, N.C. — U.S. consumers report their chicken consumption remains high although 2017 levels have moderated and returned to those seen a couple of years ago, according to new research presented today at the 2017 Chicken Marketing Summit.

Recalling behavior during the two weeks leading up to the survey, 84% of consumers said they ate a chicken meal or snack purchased from a supermarket and 67% ate a chicken meal or snack from a food service establishment. Both supermarket and food service establishment consumption numbers decreased, 3.4% and 6.9% respectively, and are now at parity with those seen in 2015.

“The U.S. Department of Agriculture projects Americans will eat close to 92 pounds of chicken per person this year, breaking last year’s record of 91 pounds,” said NCC Senior Vice President of Communications Tom Super.  “Although consumers’ self-reported consumption is down slightly in the survey, the data show that chicken is still top of mind for consumers.”

Although past two week consumption has decreased somewhat, consumers’ taste for chicken shows no signs of waning.  In the next 12 months, 21% of consumers anticipate eating more chicken from the supermarket and 13% anticipate eating more from a food service establishment.  Consumers with the highest consumption levels tend to skew younger and be more ethnically diverse and live in larger households.

As part of the survey, consumers were asked to rank various factors on satisfaction and in order of importance.  Regardless of purchase channel, the importance of freshness, taste and price rise to the top.  Consumers are satisfied with freshness and taste, however satisfaction with price at supermarkets is somewhat lower.

When it comes to reasons that consumers purchase chicken over other types of meat, its healthiness, versatility and convenience top the list.

Consumers are being exposed to media coverage relative to the care of chickens.  Nearly three-quarters said they have seen articles in the past year and most of those would characterize the tone of the coverage as neutral or negative.

The survey was commissioned by the National Chicken Council  and conducted online by ORC International June 5 – 8, 2017, among 1,013 adults.  Funding was provided by Elanco and WATT Global Media.  A full copy is available by clicking here.

The AAW Champion of Agriculture