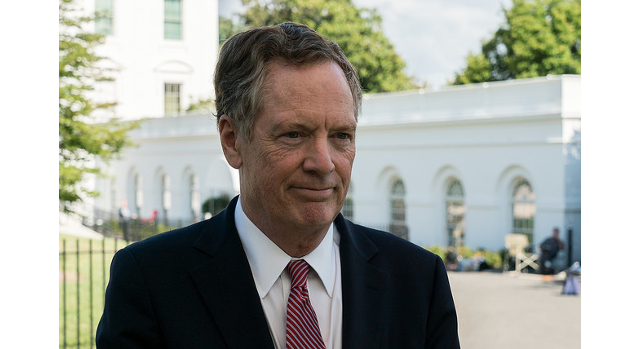 TOKYO — The United States will call for the inclusion of a provision to prevent currency devaluations in a trade agreement the country is eager to strike with Japan, the Office of the U.S. Trade Representative said Friday.

In a summary of negotiating objectives for bilateral talks it intends to start with Japan as early as in late January, President Donald Trump’s administration will also seek to include trade in services such as telecommunications and financial services in the agreement.

The administration will push Japan to reduce or eliminate tariffs on U.S. agricultural imports, and to address nontariff barriers in the automobile sector, the summary said.

“U.S. exporters in key sectors such as automobiles, agriculture and services have been challenged by multiple tariff and nontariff barriers for decades, leading to chronic U.S. trade imbalances with Japan,” it said.

“Our aim in negotiations with Japan is to address both tariff and nontariff barriers and to achieve fairer, more balanced trade,” the summary said, as it spelled out 22 specific areas for negotiation, such as trade in goods, investment, labor, environment and dispute settlement.

On currency, the Trump administration will “ensure that Japan avoids manipulating exchange rates in order to prevent effective balance of payments adjustment or to gain an unfair competitive advantage.”

Despite such a call, Japanese officials have said they have no plans to include a currency provision in a Japan-U.S. trade deal, partly because such a move could affect monetary policy run by the Bank of Japan.

Citing the fact that Japanese monetary authorities have not intervened in foreign exchange markets over the last seven years, the officials dismissed the view that Japan has guided the value of the yen lower against the dollar to give its exports an unfair trade advantage.

While Japanese officials insist Tokyo and Washington aim for a bilateral trade agreement on goods only, the summary showed that the Trump administration is looking to a comprehensive pact that would also cover services, investment and intellectual property.

The administration will call for provisions in auto trade so as to “address nontariff barriers in Japan as well as to increase production and jobs in the U.S.”

The summary did not say what nontariff barriers would involve, but the U.S. auto industry has spoken of what it sees as a practice in Japan of not accepting vehicles only built to American safety and environmental standards.

Trump regards automobiles as a symbol of the trade imbalance with Japan, apparently because automobiles and auto parts accounted for about 75 percent of the U.S. deficit with the country as of 2017.

The U.S. goods trade deficit with Japan totaled $68.85 billion in 2017, the third-largest after the U.S. deficit with China and Mexico.

On agriculture, the administration will seek to “secure comprehensive market access for U.S. agricultural goods in Japan by reducing or eliminating tariffs,” according to the summary.

In a meeting in September, Trump and Japanese Prime Minister Shinzo Abe agreed the United States would not demand deeper farm tariff cuts than levels Japan has agreed in other trade pacts such as a revised Trans-Pacific Partnership free trade pact, an 11-nation deal that will enter into force on Dec. 30.

As Trump withdrew the United States from the TPP last year, the U.S. agriculture industry has called for a swift deal with Japan out of fears it might lag behind other farming nations that have tariff-cutting agreements with Japan.

In a hearing by the Office of the USTR on Dec. 10, representatives from the U.S. Meat Export Federation, the National Cattlemen’s Beef Association, the North American Meat Institute and the National Pork Producers Council stressed the urgency of reaching a trade agreement with Japan.

Under the revised TPP, formally known as the Comprehensive and Progressive Agreement for Trans-Pacific Partnership, Japan’s 38.5 percent tariff on beef imports will be lowered in stages to 9 percent over 16 years.

USDA functions in the event of a lapse in funding