Home » U of I prof. to keynote soybean conference 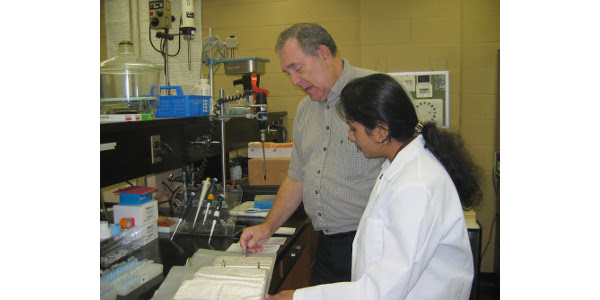 Ted Hymowitz and Leina Mary Joseph look through a binder of 11,000 tested soybean samples. (Courtesy of University of Illinois)

URBANA, Ill. — The email addresses of most of the faculty and staff at the University of Illinois are the first initial and a portion of their last name. Not so for U of I Professor Emeritus Theodore Hymowitz. His email address speaks to his passion and lifelong pursuit: soyui.

Hymowitz will be a keynote speaker at the World Soybean Research Conference, Sept. 10-15 in Savannah, Georgia. How appropriate, as this year’s conference is celebrating 250 years of soybean in North America. Hymowitz hasn’t been studying the soybean that long, but he is as well, or even better, known as a soybean historian than a crop scientist. On an unfunded, freelance basis during his career, he traveled the world sleuthing the soybean and its roots.

In 1983, Hymowitz and his colleague J.R. Harlan published a paper attributing the introduction of the soybean to North America to Samuel Bowen in 1765. Later, Hymowitz pinpointed the entry of the soybean to the United States to be Savanah. But it wasn’t until Jan. 2016 that the Georgia Historical Society recognized his discovery. A historical society marker was erected at the Skidaway Institute of Oceanography to commemorate the soybean’s arrival.

After receiving his Ph.D. from Oklahoma State University, Hymowitz joined the faculty at the University of Illinois in the Department of Crop Sciences in the College of Agricultural, Consumer and Environmental Sciences. He spent his entire career at Illinois working on breeding, genetics, and the history of the soybean.

While at the University of Illinois he conducted research on the variation in and genetics of biologically active and anti-nutritional components of soybean seed and conducted plant exploration trips to Asia, Oceania, and Australia to locate potential germplasm resources for soybean varietal improvement.

In 2015, Hymowitz completed a decade-long effort with University of Arizona scientists Monica Schmidt and Eliot Herman. The team of researchers yielded a new soybean with significantly reduced levels of three key proteins responsible for both its allergenic and anti-nutritional effects. The work is described in a paper published online in the journal Plant Breeding.

For more about the conference, visit http://wsrc10.net/program/keynote-speakers/.