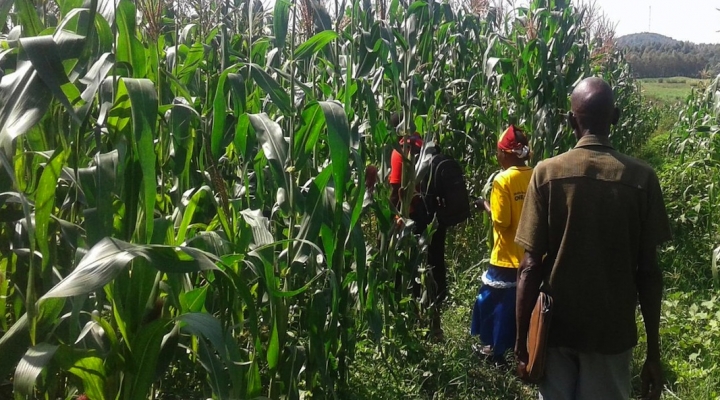 Lora Wright, Tyson's director of animal well-being, said Tuesday that over the past year, Tyson has installed the industry's largest third-party monitoring system — with off-site auditors reviewing operations at Tyson's 33 poultry processing plants across the U.S. and concentrating on areas where workers handle live animals. The company also has trained nearly five dozen animal well-being specialists like Stacy Barton, who grew up on a poultry farm. (Imogene Huxham, Flickr/Creative Commons)

PLUMERVILLE, Ark. (AP) — Tyson Foods has installed video cameras in key areas of its poultry operations and will test new ways to slaughter birds — not in response to previous “gotcha” moments but under a corporate philosophy that notes its role as a steward for millions of chickens, the company said.

The Springdale, Arkansas-based meat producer last month hired its first chief sustainability officer and on Wednesday announced a series of animal well-being initiatives. In an interview Tuesday, Justin Whitmore said that while abuses at myriad companies have been exposed through secretly recorded video, taking action now prevents having to react later.

“We want to learn from the opportunities and the challenges we face,” he said, seven weeks after taking his post. “If we see something come up in our system, we’ll look to have the appropriate measures in place to ensure they don’t recur.”

Tyson last August fired 10 workers after secretly recorded video compiled by an animal rights group showed chickens being crushed or swung by their legs and wings. Tyson terminated a contract with a farmer a year earlier after another group released video showing workers standing on birds’ heads to break their necks. Over the past year, Hormel Foods has hired third-party auditors to review hog farms after video showed some animals in very tight quarters and another animal being slammed to the floor.

Lora Wright, Tyson’s director of animal well-being, said Tuesday that over the past year, Tyson has installed the industry’s largest third-party monitoring system — with off-site auditors reviewing operations at Tyson’s 33 poultry processing plants across the U.S. and concentrating on areas where workers handle live animals. The company also has trained nearly five dozen animal well-being specialists like Stacy Barton, who grew up on a poultry farm.

“We’re making sure the birds are being handled properly and treated with respect and care in every step of the process,” he said Tuesday outside a 120,000-bird operation near Plumerville, about 35 miles (56 kilometers) northwest of Little Rock. The well-being officers are also trained on how cattle and hogs should be handled. Some of their visits are announced; others are not.

Additional but less-intensive monitoring among the growers who raise chickens for Tyson is in the works, said Adam Aronson, whose New York-based company Arrowsight monitors operations from a hub in Huntsville, Alabama.

“We’re spot checking the workers throughout the day,” Aronson said. Arrowsight reports back to Tyson regularly on whether workers are handling birds properly.

While it’s a little like Big Brother, the general concept is “if you could replicate having your best front-line managers at all times,” he said. “We’re like the football coach looking down from the booth with a headset. That’s effectively what is going on.”

He said Tyson is by far the deepest into video auditing of poultry operations, after other companies pioneered it for beef, pork and turkey.

Bret Hendricks, who is responsible for the 7 million chickens that will one day be processed at Tyson’s plant in Dardanelle, said the company has recognized that keeping animals content helps the bottom line.

“If they’re happy, the more they’re going to eat and the more they’re going to grow,” Hendricks said before a tour of a growing operation at Plumerville. Inside, some of the 120,000 nine-day-old birds raised here scurried underfoot; others stayed near automated feeding and watering stations. Each of the birds weighed a little less than a half-pound each. At 33 days old, they’ll average about 3.65 pounds and be ready for slaughter.

The company also said it will experiment with “controlled atmosphere stunning,” in which birds are suffocated by carbon dioxide rather than being stunned and having their throats slit.

“We think that there could be an opportunity to process and slaughter the birds in a more-humane way,” Whitmore said. “We … are going to test it.”

The company said it will also consider adding perches for the birds.