Subscribe
Home / Florida / Two with UF/IFAS ties to be inducted 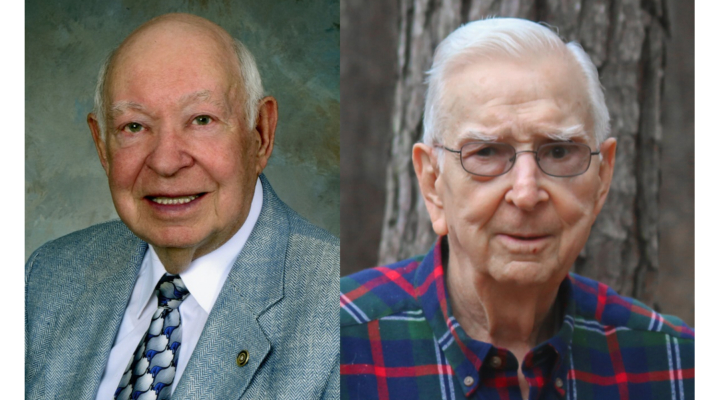 Lowell Loadholtz spent most of his career as an Extension agent in Escambia and Brevard counties. He’s originally from Lake Butler. Harold Mikell was a state forester for years. He’s from Trenton. (Courtesy Photo)

GAINESVILLE, Fla. — One spent his career bringing research-based data from the University of Florida Institute of Food and Agricultural Sciences to Florida’s farmers; the other spent his career planting trees and protecting forests.

Two inductees into the Florida Agricultural Hall of Fame on Feb. 13 at the Florida State Fairgrounds in Tampa, Florida, have ties to the University of Florida Institute of Food and Agricultural Sciences:

Loadholtz began his commitment to Florida 4-H as a 10-year-old in Union County. Later, as a student at Union County High School in Lake Butler, Loadholtz participated in 4-H swine and dairy cattle shows at the Suwannee Valley, Central Florida, Florida State and Union County fairs.

Loadholtz credits his mentors in 4-H with shaping his values and helping him understand what he wanted to do for a living.

“They did that for me, and I never forgot it. That’s what I wanted to do is be like those men that had helped me get started in life,” he said.

After high school, Loadholtz graduated from Berry College in Rome, Georgia, and later went to work as a UF/IFAS Extension agent in Escambia County. While there, he built programs in 4-H. He also earned his master’s from Mississippi State University, driving six hours each way every weekend from Pensacola, Florida, to Starkville, Mississippi.

Among his many accomplishments during his UF/IFAS Extension career, Loadholtz organized the Brevard 4-H Market Hog Show and Sale and recruited the Rotary Club of Cocoa to sponsor.

Loadholtz, 80, retired after 33 years as a UF/IFAS Extension agent and county director in Escambia, Brevard and Okeechobee counties.

“I enjoyed getting out into the field and working with the farmers and the ranchers, and seeing how we could help them and bring the University of Florida research-based information to them,” Loadholtz said of his career with UF/IFAS Extension.

As a leader in county agent associations at the state and national levels, Loadholtz worked hard to make sure agriculture remained a top priority for lawmakers in Tallahassee and Washington, D.C.

He said he was pleasantly surprised to be chosen as a member of the agricultural hall of fame – an honor he deems the highest in agriculture in Florida.

“I always was trying to help somebody else get recognition,” Loadholtz said. “I just never dreamed it would happen to me because I just went about doing my work to the best of my ability, helping other people – and that was my joy and satisfaction in life.”

When Harold Mikell was a student at Trenton High School in the 1940s, he planted trees on the edge of town for a vocational agriculture class. That activity sparked a lifelong interest in trees and forests.

After high school graduation, Mikell, 91, went into the U.S. Navy Air Corps in the Pacific Theater on a patrol bomber during World War II. When he returned, he went to the University of Florida’s School of Forestry.

Mikell vividly remembers a few things about his days at UF. For one thing, most of his classmates were also war veterans, and they got plenty of exercise.

“We were on the fourth floor of Rolfs Hall,” Mikell said from his home in Tallahassee. “We had to walk up the floors. They wouldn’t let students use the elevator. We developed our leg muscles and our brains at the same time.”

When he graduated from UF in 1950, Mikell worked for 41 ½ years at the Florida Forest Service, working his way up from apprentice to director.

During his time with the forest service, Mikell and his colleagues concentrated primarily on replanting forests in the wake of commercial and residential development.

After retiring from the Florida Forest Service, Mikell became a congressional liaison for the agriculture industry under Congressman Pete Peterson, a position he continued under U.S. Rep. Allen Boyd, according to the Florida Agricultural Hall of Fame website. He worked with all sectors of agriculture on a wide variety of issues: citrus canker, dairy waste disposal, sugar cane research and more. For almost two decades, he advised a multitude of agricultural associations on congressional issues, sat on numerous association advisory boards and carried their concerns to their representatives. He worked in that position until age 85.

Mikell is well known in forestry circles for many accomplishments. But when asked of which he’s the proudest, he mentioned getting wildfire procedures in place. Mikell also cited his participation in a statewide campaign in which 5 billion pine seedlings were planted.

He also has given generously to his alma mater. Because of Mikell’s support in the rebuilding of the Stern Learning Center at the UF/IFAS Austin Cary Forest, the library is named for Harold and his late wife, Juanita Mikell.

Mikell thanked the Hall of Fame Selection Committee for voting for him, but noted that he’s most proud of the fact that it’s further recognition of forestry through being included in the Florida Agricultural Hall of Fame.

“I was very pleased, the fact that forestry was recognized,” he said. “I always appreciate folks recognizing forestry. We’re kind of out in the woods working, with nobody paying attention.”