Home / New York / Two SUNY Morrisville equine students take home more than lessons from their internships
A new user experience is coming! We'll be asking you to login to your Morning Ag Clips account March 1st to access these new features.
We can't wait to share them with you! Read more here. 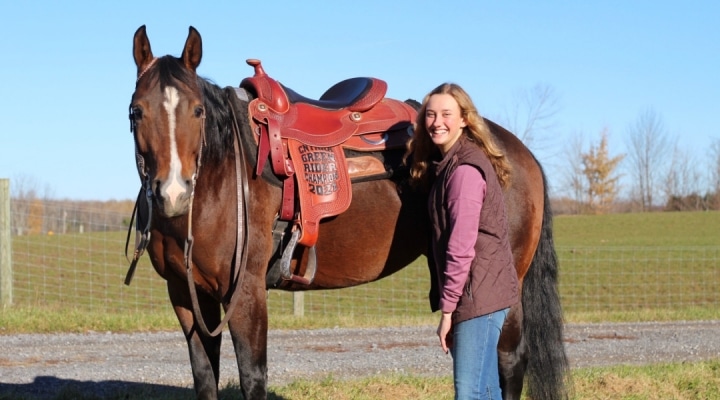 Pictured with her winning saddle is Victoria Epstein and “Lola,” the horse who carried her to her latest win. (Courtesy Photo)

Victoria Epstein, of Liberty, and Lindsey Eberle, of Holbrook, competed in the Green Reiner 1 and Green Reiner 2 classes to accumulate points for year-end awards, both through the CNYRHA Club and the National Reining Horse Association (NRHA).

“This is a very competitive class full of riders competing for this coveted saddle,” said Julie Corey, assistant professor of equine science and a coach of the college’s Intercollegiate Horse Show Association (IHSA) western team.

Epstein and Eberle rode Lola and Kicks and Giggles, horses which were donated to the college’s western program, to their wins.

“We are lucky to have these two talented horses in our barn for the students to utilize and I can’t thank the donors enough who support our program,” Corey said.

SUNY Morrisville’s curricula are enriched with applied learning and pave the way for opportunity at both the Morrisville and Norwich campuses. An action-oriented, interactive learning lab, the college is a national leader in technology and has been lauded for its exemplary, innovative and effective community service programs.