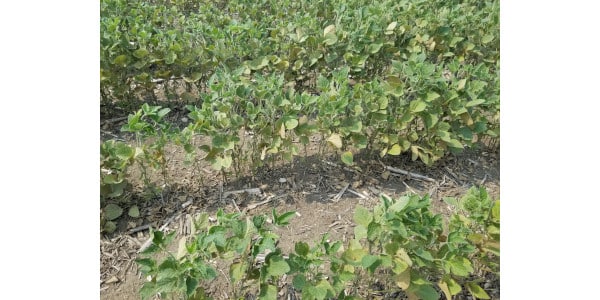 MINNEAPOLIS — The hot, dry growing season has led to infestations of two-spotted spider mites in many areas of Minnesota. Over the past two weeks, increasing numbers of fields with economic infestations have been observed. Most, but not all, have been in areas with obvious drought stress. Soybeans appear to have the heavier infestations although spider mites also be found in corn and other crops.

Complicating these developments are reports of inconsistent performance of chlorpyrifos (e.g., Lorsban), presumably due to populations of resistant mites, which were first documented in Minnesota in 2012. Since then, chlorpyrifos applications to soybean and other crops have continued selection for resistant populations.

Two-spotted spider mite populations are typically kept in check by predators, fungal disease, and adequate moisture. Warm, dry weather and moisture stress of the crop favor mite reproduction. When conditions are favorable for the mites, their rapid life cycle and high reproductive rates can quickly create large populations and damage crops. Other factors may accentuate mite populations, including some insecticides and fungicides. Once spider mite infestations are established and building, a single rainfall event or even short-term change in weather is not likely to stop an infestation.

Mites and their damage often show up on field edges first because mites move into crops from adjacent perennial vegetation (pastures, roadside and drainage dishes, alfalfa fields, cover crops) where they overwinter. This movement is accelerated by both normal host maturity and by drought induced stress / dieback of host plants. Mites readily disperse by catching the wind with a silk thread. Higher numbers are typically caught near the field edge, but the dispersing mites can be found throughout the field. Populations on newly infested plants usually progress from lower leaves to the upper canopy with building mite numbers and deteriorating plant quality stimulating further dispersal throughout the field. The result: crop symptoms are typically noted first near the field edge, but the bulk of the field is usually not far behind.

However, not all fields follow the typical patterns. Mites can be easily found in some fields that have not been dry or currently showing drought stress and have received at least one heavy rainfall this season. Compaction, root disease, and SCN can induce moisture stress in years where moisture is otherwise adequate. Caution: Applications of many pyrethroid insecticides can flare spider mite populations and may not control soybean aphids. Additionally, there is evidence that, neonicotinoid insecticides may favor mite populations through several mechanisms and that fungicides may reduce the fungal attack on mites.

The presence of spider mites will affect pesticide decisions. Table 1 provides an overview of some important considerations for insecticides/miticides labeled for control of two-spotted spider mites in corn and soybean. In Minnesota, there is the potential for spider mites to be resistant to chlorpyrifos (e.g., Lorsban) and, perhaps, cross-resistant to dimethoate. Insecticides /miticides vary in which stages of mites they control. Rebound of mite populations after a pesticide application can occur through two mechanisms: Surviving adults and immatures that continue reproduce in the absence of beneficial insects; and rebound from uncontrolled eggs.

By the time infestations are detected on field edges, mites are likely well into the field. Because of this, border treatments are not advised without thoroughly scouting throughout the field.

When should a two-spotted spider mite infestation be treated?

The following infestation scale guidelines will help minimize the need to re-treat a field and minimize yield loss. Infestations and damage can progress quickly so be ready to act when a soybean field reaches 2 and treat when a field reaches a 3 on the following scale.

Damage isn’t reversible, so it’s important to protect the middle and upper canopy leaves. At a rating of 3, there’s heavy stippling on the lower leaves with some stippling progressing into the middle canopy and very little in the upper canopy. At this point, mites will be common in the lower canopy, present in the middle canopy and with scattered colonies in the upper canopy. Some lower leaf yellowing will be common with accelerated leaf loss in small areas. In cooler weather, these symptoms will be less pronounced; focus on mite abundance and distribution.

Before you spray, scout to make sure mites are still present. Damage lags population buildup and doesn’t go away when mite populations crash or disperse. Tapping leaves over a piece of white paper can help detect live (moving) mites.

Thorough coverage of the canopy is important. Don’t skimp on water under dry / hot conditions. Make sure the applicator is using at least 5 gpa by air and 20 gpa by ground.

Because of potential pesticide resistance and population rebound from eggs, it is important to evaluate the efficacy of your mite control application within 5-7 days.

For more information on spider mites on soybean see: https://extension.umn.edu/soybean-pest-management/managing-spider-mite-soybean. For corn, a 2012 fact sheet PDF is available for download at: Managing two-spotted spider mites in corn.

*Restricted use pesticide
Always read and follow label directions.
Products are mentioned for illustrative purposes only. Their inclusion does not mean endorsement and their absence does not imply disapproval. 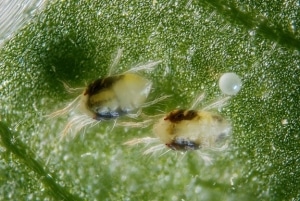 How to manage spider mites on produce crops

CHAMBERSBURG, Pa. — Spider mites are tiny arachnids that can have a big impact on our gardens and farms. They measure less than 1/50th of an inch with eight legs. Two spotted spider mites, one of the most common species we encounter, will be a cream color with two dark patches on either side of […] 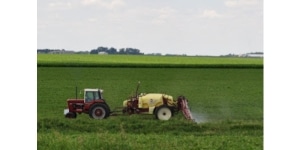 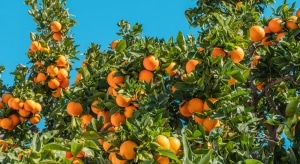 EPA is banning chlorpyrifos after 14 years of pressure

WASHINGTON — On Aug. 18, 2021, the U.S. Environmental Protection Agency announced that it will end use of chlorpyrifos – a pesticide associated with neurodevelopmental problems and impaired brain function in children – on all food products nationwide. Gina Solomon, a principal investigator at the Public Health Institute, clinical professor at the University of California, San Francisco […] 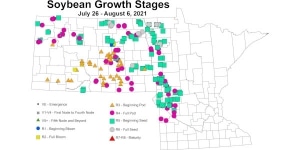 MINNEAPOLIS — UMN Extension soybean IPM scouts traveled across northwest and west central Minnesota completing another couple of weeks of data collection. When visiting each soybean field, scouts first sweep for grasshoppers in the grassy area next to the field and then begin walking in a zig-zag pattern throughout the field, stopping along the way […]

Miller family recognized as a 2021 ‘U of M Farm Family’