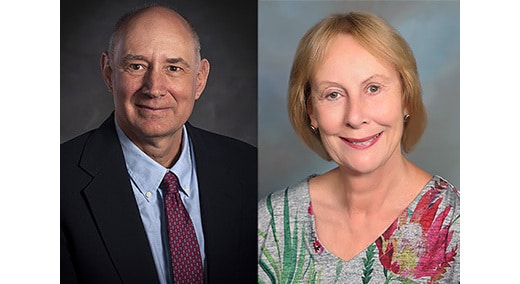 Lindsay H. Allen and Terry A. Isbell have earned a place in the Agricultural Research Service (ARS) Science Hall of Fame for their pioneering and impactful research in human nutritional health and biobased product development. ARS established the Science Hall of Fame in 1986 to honor senior agency researchers for outstanding, lifelong achievements in agricultural science and technology. (Courtesy Photo)

WASHINGTON — Two scientists have earned a place in the Agricultural Research Service (ARS) Science Hall of Fame for their pioneering and impactful research in human nutritional health and biobased product development.

Lindsay H. Allen and Terry A. Isbell were recently inducted in a virtual ceremony. ARS established the Science Hall of Fame in 1986 to honor senior agency researchers for outstanding, lifelong achievements in agricultural science and technology. The scientists are inducted by their peers and must be retired or eligible to retire to receive the honor.

“This year’s inductees embody the scientific excellence that has made ARS a premier research agency and world leader in addressing important issues facing agriculture and the environment today,” said ARS Administrator Chavonda Jacobs-Young.

A research physiologist at the ARS Western Human Nutrition Research Center’s Obesity and Metabolism Research unit in Davis, Calif., Allen is being honored for outstanding and sustained contributions leading to a better understanding of micronutrient deficiencies, particularly vitamin B12 which is only available from animal food sources. In some instances, Allen’s findings reversed long-held scientific dogma. In the case of vitamin B12, for example, her research showed that a deficiency of this micronutrient isn’t solely limited to strict vegetarians, but is also widespread in men, women and children who consume inadequate amounts of animal-source foods such as fish, meat, poultry milk and eggs. This deficiency also extends to low-income population groups.

Allen’s research also showed that consumers could be deficient in a suite of micronutrients because of poor dietary quality. Based on those findings, she helped to devise micronutrient supplement formulations for infants and pregnant women that were adopted by the United Nations Children’s Fund (UNICEF) and used globally with notable beneficial impacts on maternal and infant health, as well as pregnancy outcomes.

More recently, Allen’s work showed that women consuming poor-quality diets low in animal-source foods tend to have lower breast milk concentrations of most micronutrients, findings that led to substantial funding by the Bill and Melinda Gates Foundation and other organizations. The World Health Organization, together with the Food and Agriculture Organization, in 2006 also tapped Allen to develop guidelines for the micronutrient fortification of food, an information resource that has been cited more than 1,500 times and translated into Spanish, French and Chinese.

Isbell, a retired chemist from the ARS National Center for Agricultural Utilization Research’s Bio-Oils Research unit in Peoria, Ill., is being recognized for his leadership in the conception, design and execution of research to develop an array of products derived from crop commodities such as vegetable oil rather than nonrenewable sources such as petroleum. In particular, Isbell’s research set the stage for the commercialization of estolides, a class of bio-synthetic oils with numerous uses in lubricant, automotive, marine and personal-care applications.

In his research, Isbell proceeded with an eye towards adapting the chemical structure of the estolides to the particular applications for which they were intended. This approach typically began with catalyzing reactions between an alcohol and unsaturated fatty acids in the oils of such crops as canola, sunflower, safflower, lesquerella, castor and high oleic-acid soybeans—all renewable alternatives to mineral oil- and petroleum-based materials typically used.

Isbell and colleagues’ collaborations with private industry led to the commercialization of two high-performing estolides-based motor oil formulations (5W-20 and 5W-30) that received certification from the American Petroleum Institute in 2014, marking the first time a biobased oil has ever received such certification.

Isbell’s accomplishments also include laying the foundation for growing field pennycress as a winter-hardy oilseed crop that can precede corn or soybeans and serve as a midwestern biofuel resource. Toward that end, Isbell developed new, non-dormant field pennycress germplasm lines whose seed won’t germinate in subsequent corn or soybean plantings, disrupting their productivity. Isbell also developed technologies to use pennycress as a feedstock for potential downstream applications.