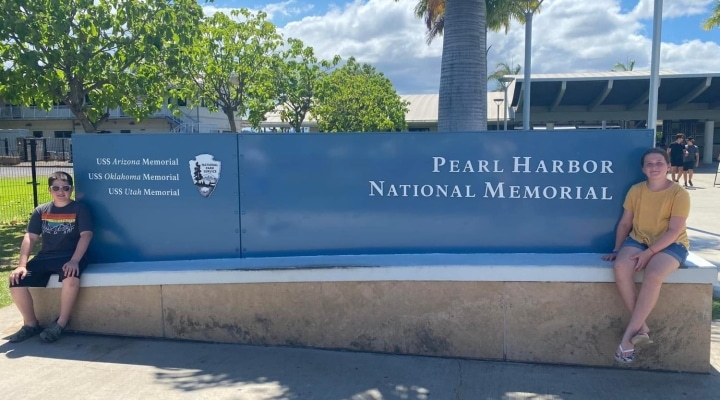 “I applied for the Wounded Warrior camp on a whim, knowing that we didn’t stand a chance in being selected, as there were only 20 available slots and it is open to kids from across the U.S.,” LeClair said.

The 4-H camp was designed for dependents of Wounded Warriors — those who incurred a physical or mental injury, illness, or wound during military service.

“I served in the Army for eight years with two deployments to Iraq,” LeClair said. “I have a few service-connected disabilities, which made Jack and Reagan eligible for this Wounded Warrior Camp in paradise.”

Families paid only a $30 registration fee. A grant from the U.S. Army covered the cost of 4-H camp and airfare. Dependents from all branches of service were eligible to apply.

“I didn’t even tell my kids that I applied because I didn’t want them to get their hopes up,” LeClair said. “When I opened my email, I nearly fell over as it announced that not one, but both of my children were chosen to attend camp in Hawaii.”

Campers spent a week on the North Shore of Oahu at YMCA Camp Erdman. The adventure included yoga on the beach, archery, swimming, a high-ropes course, crafts, campfires and other activities. The camp was open to youth entering grades six to 10 in the fall.

“Camp was really fun,” said Reagan. “We did a bunch of different activities. They have a theme every week, and our theme was Monsters, Inc. We got to make up our own haunted house in a cabin.”

Reagan said she developed skills in talking with others. “I hadn’t seen any of these people before,” she said. “So, I introduced myself and made some new friends.”

LeClair noted that Reagan is shy, so she was proud of her for attending an overnight camp and getting to know new people. “They had so much fun,” LeClair said. “Both of them came out of their comfort zones and tried new things.”

Reagan forged strong friendships at camp and has since talked on the phone to a fellow camper who lives in Hawaii.

Since joining 4-H a few months ago, Jack and Reagan have visited the Pennsylvania State Capitol. “It’s great that our state representatives know some of these kids by name just because of what they’re doing through 4-H,” Christine LeClair said.

The children will volunteer with 4-H at the Carbon County Fair, and Jack plans to enter an air rifle project.

“It’s great that they’re able to meet other kids who share the same interests as they do,” Christine LeClair said. “They learn how to work together, and they’re all serving our community in different ways, which is fantastic for them to learn at such a young age.”

What would Reagan and Jack tell people who are considering joining 4-H?

“I’d tell them that 4-H is a great way to learn new things, meet new people and find new interests and things that you didn’t know you liked,” Jack said.

Reagan’s advice? “It would be really fun, and there will be different opportunities for you to do so many things,” she said.

Administered in Pennsylvania by Penn State Extension, 4-H is a nonformal educational youth-development program of the United States Department of Agriculture that helps young people develop knowledge and skills to become capable, caring and contributing citizens. To find your local program, visit the Penn State Extension website at https://extension.psu.edu/programs/4-h.