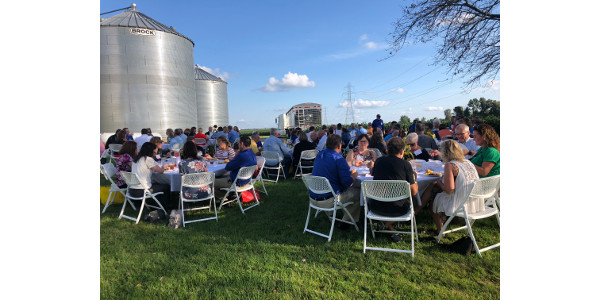 The CAE Awards celebrate unique, volunteer-driven programming at the local level. The winning counties will be recognized and will exhibit their programs at AFBF’s 100th Annual Convention and IDEAg Trade Show in New Orleans.

“We decided to do a farm-to-fork event but we wanted to add a little bit of a twist, which was having our farm-to-fork benefit the community,” said Meredith Cobb, Benton County Farm Bureau education and outreach coordinator. “To help the community, we decided to raise money for the Fowler Theater, which is run by volunteers. So many families in the community use the theater for local, affordable entertainment.”

The community embraced the event and Benton County Farm Bureau quickly sold out of tickets and earned more sponsors than expected.

“Our goal for this first year was to sell 50 tickets, but we had to stop selling tickets at 160 because we ran out of space,” explained Cobb. “We also received nearly $6,000 in sponsorship for the event and nearly all of the food for the meal was donated by local farmers.”

Cobb said another success from the event was the connections the county Farm Bureau was able to make with community members and local businesses.

“We got out in our community and met so many people and worked with them closely,” she said. “We had so many individuals, farm families and businesses helping out. Benton County Farm Bureau just had the idea and asked others to get involved!”

In the end, Benton County Farm Bureau raised $6,500 for the Fowler Theater. The county has since hosted its second Farm to Fork, raising $10,000 for the community food and service co-op with $12,000 in sponsorships.

Wayne County Farm Bureau was awarded for its Summer Harvest Supper, a farm-to-fork style dinner for leaders and influencers in the community. The goal of the event was to create a relaxed forum for open, honest communication about food and farming. This was Wayne County’s second year hosting the event, which was started in an effort to address misinformation in the community about agriculture.

“We didn’t want to try to address the masses,” explained Max Smith, Wayne County Farm Bureau president. “We felt we would be most effective if we targeted decision makers and local professionals in the community. We invited health and nutrition leaders, educators, and anyone that had significant influence on the community.”

To create the type of environment that would encourage open communication, Wayne County Farm Bureau decided against having a formal speaker at the event. Instead, they invited local farmers and agribusiness professionals to rotate from table to table to speak about their businesses and answer any questions that the attendees had.

“The simplicity of it made it work,” said Smith. “Being outside, under a shade tree with a home cooked meal and no speaker made the informal discussion around the tables between guests and host farmers easier.”

The feedback Wayne County Farm Bureau leaders have received has only reinforced their decision to hold such an event.

“Everyone left feeling more comfortable about the food they eat and why we, as farmers, make the decisions we do,” said Smith. “We’ve received notes and follow up calls from community leaders expressing their gratitude and sharing that they did not realize all of the issues the agriculture community was facing. It also has impacted the farmers positively.”

Every seat was filled at this year’s Summer Harvest Supper.

Benton County and Wayne County Farm Bureau will be recognized and will exhibit their programs during AFBF’s 100th Annual Convention and IDEAg Trade Show, Jan. 11-16, 2019, in New Orleans. Winning counties receive a $2,250 stipend to apply toward the cost of travel and exhibition.