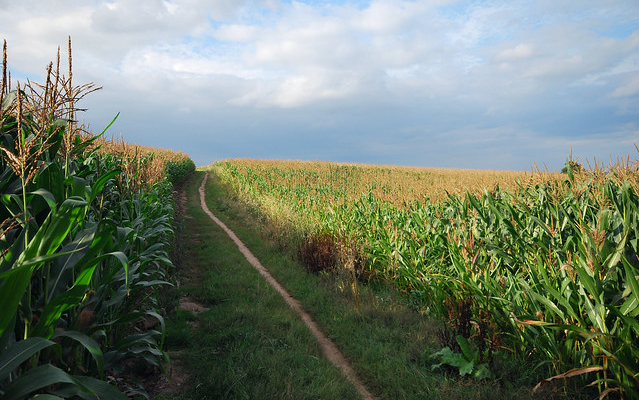 Throughout North Florida, producers have reported seeing corn of certain varieties with twisted whorls and other unusual symptoms. Soon after planting, the region experienced cool temperatures in combination with the occurrence of cloudy days. (photo by Victor Bayon, creative commons/flickr.com)

MARIANNA, Fla. — Throughout North Florida, producers have reported seeing corn of certain varieties with twisted whorls and other unusual symptoms. Soon after planting, the region experienced cool temperatures in combination with the occurrence of cloudy days. Later on, as corn entered a more rapid growth stage, the plants were exposed to warm temperatures and sunny days. This type of alternating weather and temperature extremes can cause stress to the development of the corn plant.

Some varieties appear to be more susceptible to this type of stress. The abnormal growth recently noticed has been during the late V5 to early V6  growth stage, when plants were around knee-high.

Symptoms seen as corn attempts to grow out of the weather-induced stress include kinked stalks and twisted whorls (or buggy whipping). The lower leaves are typically normal in appearance, although some may exhibit crinkled or ribbed tissue near the base of the leaf blade. In severe cases, the corn displays symptoms that mirror the type of injury you would expect to see from drift of a growth regulator type of herbicide. With continuous warm, sunny days the corn affected by the syndrome is expected to grow out of the twisted whorls with a minimal effect on yield. As the corn grows out of this stressed state, you should expect to see bright yellow leaves emerging from the whorl. This is a sign that the plants are growing out of their twisted state and will begin to have maximum leaf surface area exposed to gather sunlight. In severe cases where corn has been in the twisted state for more than two to three weeks, reduced productivity and yield loss may result.

Much of the North Florida corn crop is now beyond the V5-V6 stage, but if you notice twisted whorls or yellow flag leaves in the field contact your local extension agent. Misidentification as chemical drift or nutrient deficiency can be costly, if samples are pulled over a large area for diagnosis, or if a corrective fertilization is attempted before confirmation. Some producers do not notice the twisted whorls or buggy whips, but instead spot the discoloration across the field associated with flag leaves as the crop grows out of the syndrome.

For more information on this syndrome and it’s occurrence, view the following article published by Pioneer:  Wrapped and Twisted Whorls in Corn

For more information and for pictures, please click here!