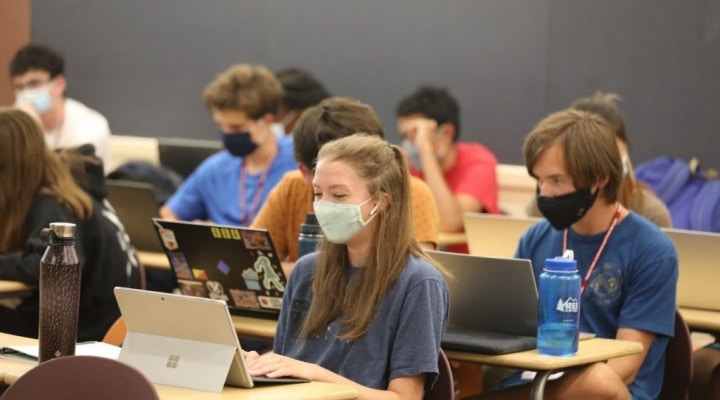 The month-long enrichment program for high-schoolers is hosted each year by Virginia Tech’s faculty, staff, and students. The program not only exposes students to agriculture, it also introduces many to their first university and opens paths to higher education. (photo provided)

BLACKSBURG, Va. — Throughout the past two decades, thousands of students, along with thousands of stories, have emerged from the Virginia Governor’s School for Agriculture.

The month-long enrichment program for high-schoolers is hosted each year by Virginia Tech’s faculty, staff, and students. The program not only exposes students to agriculture, it also introduces many to their first university and opens paths to higher education.

For its steadfast supporters and participants, such as Chaney Merritt ’20, M.S. ’21, this is a meaningful milestone for the program.

In 2017, Merritt was a rising senior at Patrick County High School in Stuart, Virginia. The small town and surrounding area are well-known for their farming communities, and Merritt’s family is no exception. For 50 years, her father and two uncles ran a successful tobacco crop farm. Today, it is a beef cattle farm with about “500 head of mama cows,” Merritt said.

“Having grown up on a farm all my life, I saw agriculture only from the farmer aspect and the producer aspect,” she said.

Governor’s School broadened her understanding of agriculture and inspired her to pursue a degree in the industry.

“I think the biggest thing I took away from ‘gov school’ as a student is the amount of diversity in the agriculture industry,” Merritt said. “I didn’t realize how many other jobs and opportunities are available.”

The experience exposed her to Virginia Tech, now her alma mater.

“During that month, I fell in love with campus. It was pretty much the decision-maker,” she said.

Having graduated in May, she is searching for a high school horticulture teaching position. This summer, she served as the Governor’s School on-site director, helping oversee 50 bright and energetic rising juniors and seniors.

Since 2001, an estimated 1,800 students from across the commonwealth have participated in the program.

According to this year’s director, Kellie Claflin, an assistant professor in the Department of Agricultural, Leadership, and Community Education, research indicates that participation in Governor’s School for Agriculture supports college readiness, as well as affirming students’ career choice in agriculture or science, technology, engineering, and math (STEM).

Claflin called the program a unique opportunity to not only expose students to possible careers, but also think critically about complex issues within the context of agriculture.

“As one of the top industries in Virginia and the source of food and fiber, an understanding of agriculture is critical for consumers,” Claflin said. “Along with Virginia Tech and the college’s faculty and staff, Governor’s School for Agriculture has the direct ability to make a lasting impact on students.”

The 2021 cohort arrived on campus on June 27 and spent four weeks learning from some of Virginia Tech’s top research faculty in the College of Agriculture and Life Sciences.

Students conducted their own research in agricultural areas of study, such as bioenergy, food security, sustainability, and climate variability, resulting in detailed research papers, brochures, and a research symposium on the final day of school.

Lauren Baptiste, a rising senior from Springfield, Virginia, was among a group of 20 student researchers in the Food Security group. Their research specifically focused on food waste.

She said she was challenged – especially by the 20-page research paper they authored – and rewarded by all the opportunities the program provided.

“I enjoyed touring the labs because I’m really into science,” Baptiste said. “One of our professors showed us a mass spectrometry lab and a genomic lab. He also introduced us to graduate students who used drones to conduct agriculture and turf management research, which I found really interesting.”

Baptiste, like most of her peers in the program, is from Northern Virginia, where the agriculture industry isn’t as prominent as it is in other areas of the commonwealth.

Brighton Lieu, of Leesburg, Virginia, said that is one of the reasons he was attracted to the program. He wanted to learn more about the agriculture industry, specifically from an engineering standpoint.

Lieu’s research topic at Governor’s School was reducing nonrenewable energy use in agriculture, or, converting to renewable resources, such as solar and wind energy.

Outside of the labs and the classrooms, Baptiste and Lieu explored Virginia Tech’s campus, hiked at nearby Cascade Falls, strolled around the Duck Pond, and took field trips that offered hands-on, real-world experience in the agriculture industry.

As part of an elective course in bovine reproduction, Baptiste visited Kentland Farm where students checked on pregnancies of the cows using ultrasound technology.

Likewise, Lieu had his first introduction to horses at the Smithfield Horse Center, a Center for Advanced Innovation in Agriculture testbed for research, teaching, and extension activities.

Both Lieu and Baptiste agreed that Governor’s School exceeded their expectations, and they were proud to be members of the 20th class and part of the 20th anniversary.

“It was an amazing experience that I hope students get to take part in for years to come,” Baptiste said.

Agricultural attractions at State Fair of Va. inform, engage guests of all ages­