Subscribe
Home / Minnesota / Turkey To Go focuses on the classics 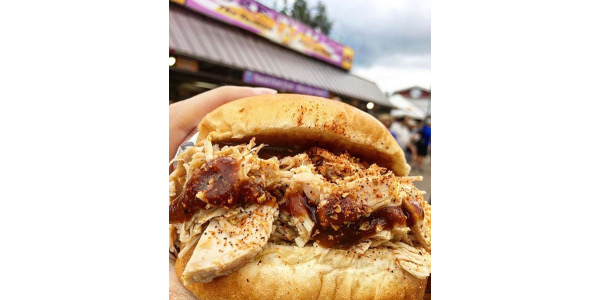 While the classic Turkey To Go menu remains a constant year after year, the flavors are still bold and delicious! The Giant Juicy Turkey Sandwich is an all-time favorite that debuted in 1999 and has garnered Turkey To Go a wide variety of media coverage reaching beyond the Great Minnesota Get-Together from food bloggers and national culinary talent alike:

Complimenting the Giant Juicy Turkey Sandwich are Slow-Roasted Turkey Drumsticks and the Tasty Turkey Sunrise Sandwich, debuted in 2015. Rounding out the menu is Turkey To Go by the pound, the perfect way to take part of the State Fair experience home!

One of purposes served by Turkey To Go is getting people to think of turkey beyond the classic Thanksgiving meal and incorporate a variety of cuts and recipes for breakfast, lunch and dinner. Minnesota’s proud turkey farm families have a driving passion for promoting and serving nutritious, convenient, on-the-go turkey products to fairgoers.

“Minnesota’s turkey companies have developed more than 2,000 different turkey products for consumer enjoyment, said Lara Durben, MTGA Interim Executive Director. “That type of innovation and the knowledge and expertise of our multi-generational turkey farm families have led to Minnesota’s growth over the last 80 years to the number one turkey-producing state in the nation.”

Turkey To Go is owned by the MTGA with day-to-day operations handled by The Turkey Guys, Drew Levin and Daniel Perkins. While MTGA handles much of the behind-the-scenes details of the operation prior to and during the State Fair, The Turkey Guys bring in their staff to run the concession stand, including cooking and serving turkey to hungry fairgoers. What’s clear from day one of the State Fair is that everyone involved in Turkey To Go loves turkey!

Lastly, MTGA is proud to announce that a portion of every sale at Turkey To Go will be donated to Hunger Solutions Minnesota (www.hungersolutions.org), an organization that is dedicated to ending hunger. This is the twelfth straight year of continuing this tradition of giving back.

About Turkey To Go

Turkey To Go’s Giant Juicy Turkey Sandwich comes in its original version or a gigantic half-pound option. Additionally, the concession stand serves up its popular roasted turkey drumsticks. Topping choices for these items include: bleu cheese crumbles and buffalo sauce; brie cheese and cranberry sauce; crispy chopped bacon and sweet glaze. Finally, the restaurant serves up its Tasty Turkey Sunrise Sandwich featuring its signature Turkey To Go product, egg, and cheese on a bun – with the option to add turkey bacon as well.

In addition to its location at the Minnesota State Fair, Turkey To Go has three locations in Target Field during Minnesota Twins’ home games (behind home plate between sections 112 and 113; in section 133; and in section 318).

MTGA is a nonprofit trade organization that began in 1939 with a mission to foster a successful turkey industry in Minnesota. The state ranks #1 for turkey production and processing in the U.S. with its 450 turkey farmers raising approximately 42 million turkeys annually. Minnesota has the most family-owned turkey farms of any state in the U.S. and many of these turkey producers are 4rd, 5th and even 6th generation farmers. For more information, visit www.minnesotaturkey.com or www.facebook.com/MinnesotaTurkey. You can also find Minnesota Turkey on Twitter (@MinnesotaTurkey), Pinterest (www.pinterest.com/MinnesotaTurkey), and Instagram (@MinnesotaTurkey).