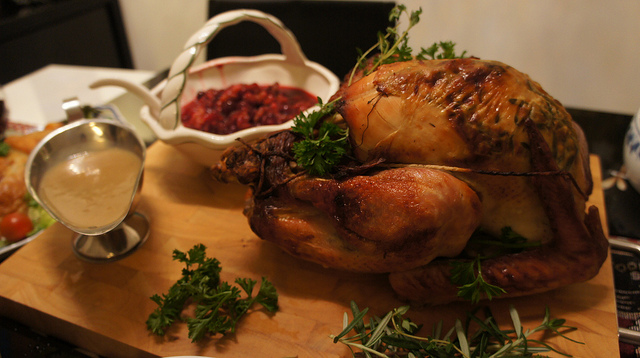 Thanksgiving is a wonderful family holiday, it’s also pretty stressful when you think about the meal that you have to prepare. (Andrea Goh via Flickr)

MADISON — Adam Wigger: Turkey tips this fall. We’re visiting today with Barb Ingham, Extension Food Science Specialist, Department of Food Sciences, University of Wisconsin-Madison Division of Extension and the College of Agricultural Life Sciences, and I’m Adam Wigger. Barb, what do we need to keep in mind this fall as we’re preparing our turkeys for Thanksgiving?

Barb Ingham: Well, you know, Thanksgiving is a wonderful family holiday, it’s also pretty stressful when you think about the meal that you have to prepare. Very few of us cook 20 pounds of meat on a very regular basis, so you’re dealing with a lot of turkey that you’re having to get safely in and out of the oven. And then there’s all the other things that you have to take care of. Usually refrigerators are full, there’s family around. So we want people to keep in mind a couple of things that I think will make it easier. One is whether you buy a fresh or frozen turkey, some people stress out about this because they think there might be advantages or disadvantages over purchasing, say, a fresh turkey, over a frozen. But there’s plenty of evidence to say that by the time you get the meal on the table, your guests won’t know the difference. So whatever is easiest for you, I think is is something to remember. If you buy a frozen turkey, you do need to handle it safely, which is going to be thawing it generally in the refrigerator. And this might take up to a week, depending on the size of the turkey. A 20 pound bird will probably take a good five days to thaw in the refrigerator. So plan for that time and then you can hold it for a day or two before it actually goes in the oven. A fresh turkey, if that’s what you choose to do, that can be purchased a day or two ahead and then just sit again in the refrigerator before it’s ready to go. The other big decision I think that people wonder about with getting a turkey into the oven is whether or not they’re going to stuff the turkey. Either, again, is fine. It’s a family preference. I grew up in a family where we had dressing, which means it was stuffing, never cooked in the turkey. I don’t know why that is, but that’s what I grew up with. But if you do prepare stuffing in a turkey, make sure that you stuff it just before it goes in the oven. So don’t stuff the turkey and place it in the refrigerator overnight. Stuffing is a great place for bacteria to grow and it doesn’t cool very quickly once it’s in the turkey. So we want to stuff it just before. And then the final thing I think to remember is cooking temperature. So the real final food safety step is making sure that the turkey reaches 165 degrees Fahrenheit. So that will be checking it with food thermometer, and in three different places. We want to check the temperature in the breast meat, in the thigh meat, and then where the wing joins the body. Those are three good places. And once all three of those reach 165 degrees, you’re good to go, it can come out. It’s great to let it stand for a little bit before you carve it. If you did happen to stuff the turkey, then the stuffing also needs to reach 165 degrees. And that may mean that the muscle tissue, the turkey meat itself is probably going to be a little bit higher. So it might take a little bit longer to cook to make sure that the stuffing also reaches 165 degrees. So a couple of things to think about, to make sure that the family meal is not only fun, but food safe.

Adam Wigger: Yeah, absolutely. Do you have a recommended or preferred style of cooking, like frying or oven?

Barb Ingham: Oh, that’s a great question. I think increasingly people are looking to fry turkeys. That’s a little more complicated. You can certainly do it. There’s special equipment. If you fry a turkey, any kind of oil will work fine. Probably oven cooking is more traditional. When you cook a turkey in the oven, something that people – there are creative ways to do that, I guess. Make sure that the oven is set at at least 325 degrees. So don’t turn the oven on to 450. I’ve heard of this before and then turn the oven off and let the turkey kind of coast through until the morning. It actually may end up cooking. It’s hard to know, but that’s not a safe thing to do. So make sure that the oven is at least 325. You can turn it up higher at the end of the cooking time. You can start high and turn it down. But 325 is to make sure that the bacteria that are going to for sure be on the turkey don’t have a chance to grow and make your guests sick.

Adam Wigger: Do you have any other tips or safety tips concerning the preparation of other Thanksgiving foods like mashed potatoes or a cranberry dish?

Barb Ingham: That’s also a great question. I think something to consider is that pumpkin pie and other cream style pies that we might make at home, those should be actually kept refrigerated. Can be confusing because we see in the grocery store a pumpkin pie and apple pie often sold on the shelf and when they do it, what we refer to is commercially, they take some extra food safety steps that would be hard for us to take it home. So if make a traditional pumpkin pie with pumpkin, often some kind of sweetened condensed milk or evaporated milk, eggs and sugar and bake that in a pie shell, that needs to be kept refrigerated. So, again, it just doesn’t make your guests sick, at the end of the meal.

Adam Wigger: At the end of the meal, do you have any tips or tricks on the preservation of leftovers or maybe some favorite leftover recipes you have?

Barb Ingham: So, leftovers. I’m going to give a shout out to my sister, who refers to anything that’s remaining after the meal as a planned-over. She says, you know, I’m planning on using that again. And her husband is famous for saying he actually likes the turkey sandwiches and the turkey leftovers almost better than the Thanksgiving meal because there are so many other things at the meal time that he also wants to eat. So when we deal with leftovers, we’ve got just a couple of hours after the meal is over before we need to get those leftovers in the refrigerator and in shallow containers. So take the meat off the carcass, put the gravy and the mashed potatoes in some good food storage containers and get those refrigerated in shallow containers. That’s because certain food poisoning bacteria actually like the heat cooking process and they’ll actually grow then if they’re not refrigerated promptly. So that keeps our leftovers safe. We refrigerate them promptly and then after that, reheating. So if you are going to reheat, then we reheat the leftovers like mashed potatoes or gravy also to 165 degrees. Of course, it’s possible not to reheat and it’s perfectly safe to take cold turkey out of the refrigerator, cold stuffing or dressing as well, or really any of the Thanksgiving foods and not reheat them and eat them cold the next day. When we refrigerate them, though, we do have a limited period of time. So by the end of the weekend. So Sunday rolls around, the guests are gone. If there’s any planned-over food that’s remaining, it’s a good idea to go ahead and freeze that for longer term storage. So three to five days and then have your planned-overs placed in the freezer for perhaps Christmas guests or something.

Adam Wigger: What are you excited about cooking or having this Thanksgiving season?

Barb Ingham: Well, we grow potatoes in our garden and so I’ll be having Thanksgiving with my mother. And that’s in South Carolina, and she doesn’t have access to some really good potatoes. So we’re gonna be bringing that down. She’ll be providing turkey and dressing and homemade bread. So I think with that and some fresh vegetables that we’ll also have, we’ll have a good meal that we’ll enjoy. I would say if you have questions around Thanksgiving-time to contact your county Extension office, there’s an individual there who’ll be able to help. And I personally will be sharing with our county educators some good food safety hotlines that will be available actually on Thanksgiving Day. USDA has information. They answer the hotline that day. Butterball does as well. And I’ll be updating our county extension educators. So a quick call to your county extension office Thanksgiving week should provide you with some good last minute information as well.