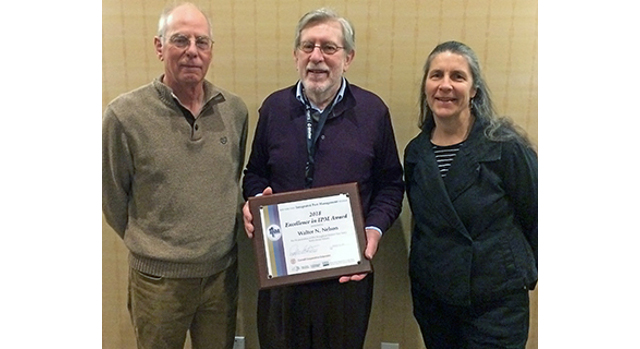 Nelson has served New York’s horticultural industry since 1978 – forty years – first as an educator in the southern tier and most recently in Monroe County. He’s sometimes called the ‘best kept secret of Rochester’. A local resource to landscapers and arborists on IPM techniques, Nelson has remained current on invasive pests and pesticide registration. Frank Rossi, Professor of Horticulture at Cornell, described him as a “stalwart of consistency in his interpretation of weather trends and the implications for stress and pest management in turf” and praised his “lifelong interest in climatology, IPM, and his service-oriented mindset.”

Nelson is also on the statewide Cornell turfgrass team, where he contributes to the weekly in-service training and newsletter. He has conducted seminars for the School Facilities Association, educating staff from various school districts on how to maintain weed-free playing surfaces without the use of pesticides. For over ten years, Nelson has led the planning of the winter education day with the Nursery and Landscape Association. Katie Berger, of Batavia Turf, praised Nelson’s contribution, “Walt led our amazing committee to take a once poorly attended, weak Education Day to be one of the most popular and successful events of the year for our region.”

Nelson also contributes by researching data for the Environmental Impact Quotient (EIQ) database. Since 1992, the EIQ has provided farmers and turfgrass managers around the world with information on the toxicity of different active ingredients used in pesticides—thereby helping them select softer products. As a result of Nelson’s work, the EIQ remains a relevant tool. Further, Nelson has used his deep knowledge of horticulture as well as DEC pesticide registrations to keep the Cornell IPM reference document, Pest Management Around the Home, updated.

Jennifer Grant, director of NYSIPM, praised Nelson’s penchant for problem solving, noting his ability “to seamlessly switch from teacher to learner,” and “effortless ability to pull in all interested parties.” As a result, Nelson has seen a high success rate with his grant proposals, she noted, “because reviewers can follow the path he describes between the problem and the possible solution, and agree that it is worth testing.” Nelson recently obtained a Community IPM grant to investigate the Crazy Snake Worm, an invasive Asian jumping species that has been plaguing lawns and plant nurseries in western NY.