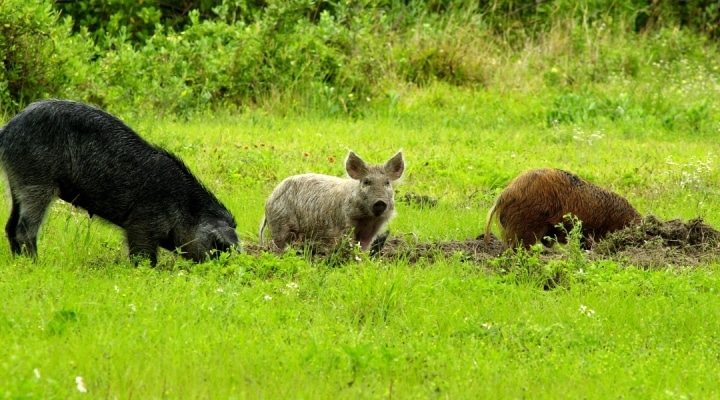 Feral swine cause a high level of economic, biologic and natural resource damage. The species are also a threat to Texas waterways and ecosystems as the population of the feral swine rapidly increase. (U.S. Department of Agriculture, Flickr/Creative Commons)

These projects are a part of the Feral Swine Control Pilot Program (FSCPP), which is a joint effort between USDA-Natural Resources Conservation Service (NRCS) and Animal and Plant Health Inspection Service (APHIS) to help address issues that feral swine pose to agriculture, ecosystems as well as human and animal health.

Feral swine cause a high level of economic, biologic and natural resource damage. The species are also a threat to Texas waterways and ecosystems as the population of the feral swine rapidly increase. Texas is a private-land state, with 83% of its land mass in family-owned farms, ranches and forests. Consequently, providing learning opportunities to landowners about effective management strategies remains crucial to the success of abating damages associated with feral swine.

Landowners in the project areas may be eligible for assistance from technicians to trap feral swine on their property. Pilot projects consist of three fundamental elements, the removal of feral swine by APHIS, restoration efforts supported by NRCS and assistance to producers for feral swine control.

The FSCPP will consist of a smart trap loan program, educational and outreach activities, as well as hiring trapping technicians to assist landowners.
This round of funding will focus on three additional project areas in the following counties: Dallam, Hartley, Nueces, San Patricio, Bee, Williamson and Milam.

“TSSWCB is proud to be a part of this effort to control feral swine in Texas alongside our partners in conservation. We are excited to expand the project efforts to new areas in the state covering over 3 million acres to protect agriculture and Texas’ natural resources,” said Liza Parker, Project Coordinator.

Through the first and second rounds of funding, there will be a total of 34 active projects across 12 states for the life of the 2018 Farm Bill. Projects are planned to conclude at the end of September 2023.

Contact Liza Parker at 254-773-2250 or by email at lparker@tsswcb.texas.gov. For more information visit: https://www.tsswcb.texas.gov/feral-swine-texas

Seeking to contribute to the US lamb industry's future?