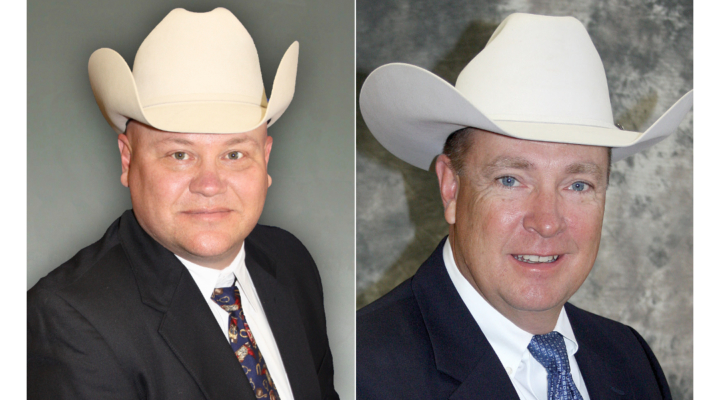 Earlier this year, Special Ranger Scott Williamson was tapped to be TSCRA’s Director of Law Enforcement, prompting a search for his replacement. The search culminated with the promotion of Special Ranger John Bradshaw and the hiring of retired Texas Ranger Jay Foster.

Bradshaw, an 18-year TSCRA veteran was promoted to fill the regional supervisor position vacated by Williamson. He will oversee 77 counties in the Oklahoma and Texas panhandles and Texas plains. He is dual commissioned, both through the Texas Department of Public Safety (DPS) and Oklahoma State Bureau of Investigation (OSBI).

Bradshaw, of Alvord, Texas, was a natural fit to take on the role of regional supervisor. Throughout his career, he has demonstrated outstanding criminal investigation skills and a strong commitment to the association, serving on both the strategic planning committee and regional association promotion team. He was also a TSCRA brand inspector before becoming a Special Ranger, which will be extremely valuable to the dozen livestock auction markets within his region.

Jay Foster was hired to fill the District 8 vacancy.

Foster retired as a Texas Ranger Lieutenant after serving 32 years with the Texas Department of Public Safety. He and TSCRA’s Special Rangers have enjoyed a close working relationship throughout his tenure as a Texas Ranger. He brings to TSCRA a lifetime of experience in criminal investigation, livestock and the ranching industry.

TSCRA’s Special Rangers are an elite group of law enforcement officers who have extensive knowledge of the cattle industry and primarily investigate cattle theft and other agricultural crimes, though they are well-trained in all facets of law enforcement. In all, TSCRA has 30 Special Rangers stationed throughout Texas and Oklahoma who are commissioned through the Texas Department of Public Safety (DPS) or Oklahoma State Bureau of Investigation (OSBI).

The Rangers also oversee more than 80 TSCRA market inspectors who collect data, such as brands and other identifying marks on 4 to 5 million cattle sold at 100 Texas livestock markets each year. Market inspectors report their findings to TSCRA’s Fort Worth headquarters, where the information is entered into the nation’s largest brand recording and retrieval system. The database is a vital tool for law enforcement when investigating theft cases.

For contact information or to find Special Rangers in other counties, please visit tscra.org and click “find my ranger.”

Mafia ripped off EU for millions in farm aid
January 15, 2020